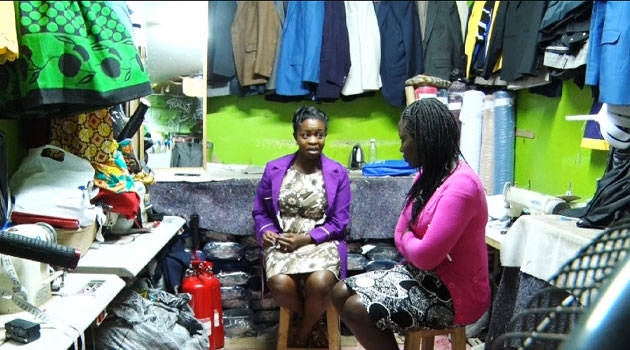 Eastleigh bound matatus are playing dance-hall music as touts persuade passengers into their vehicles. A beggar sits strategically at a corner as he calls out to by-passers to lend him money. M-PESA shops are jam-packed as shoe sellers showcase their mostly Chinese ‘latest collections’.

It is quite a spectacle.

Somewhere along that street, Margaret Wanja Kiema, a 27 year old has built a business worth millions in five years. Wanja sells imported unisex fabrics to wholesalers and retailers near Gaborone Lane next to the Nairobi Textiles building.

A Strathmore Business School Bachelor of Business Information Technology graduate, Wanja opted for the textile industry for two reasons – “My parents have been in this business way before Nairobi Textiles became as big as it is today. Being the first born, I found myself helping my parents out and hence learnt the business at an early age where I developed an interest.”

Her second reason stemmed from the gap she saw. In her words, designers and fashion houses that need her product are coming up every day. Additionally, there is a wedding every other weekend, which has created a gap for her to fill.

Starting and running the business

After she made the decision to branch out and leave her parent’s business behind in 2011, Wanja needed capital which was a huge chunk of money.

“I needed about Sh3.5 million, thankfully, my parents loaned me the cash.” A significant amount of the money – Sh2 million – went to securing the location where she is based. According to Wanja, the prime location means that people looking for fabrics can locate her easily.

Wanja confides that she repaid the loan in a year’s time with proceeds from her business.

Next, she needed stock. Armed with her borrowed money, Wanja set out to import fabrics from China, Dubai and India.

Dubai, she explained, is where ready-made fabrics are sourced from. These include fabrics for designer suits for men and women, and other fabrics making a name for them in the world of fashion. Materials sold at her shop include Khaki, cotton and satin among others.

“China is however different. I mainly work with factories there. I give them the fabric specifications I need, and they manufacture it. Hardly do I ever buy readymade materials from China due to counterfeit issues. India is however a bit of both worlds. I sometime work with Indian manufacturers and also buy readymade materials there,” she explained.

SOURCE: CAPITAL FM
How Margaret Kiema is making it big in downtown Nairobi Reviewed by samrack on February 11, 2016 .

Margaret wanja(L) speaking to the writer at her shop in downtown Nairobi/KEVIN GITAU How Margaret Kiema is making it big in downtown Nairobi Eastleigh bound matatus are playing dance-hall music as touts persuade passengers into their vehicles. A beggar sits strategically at a corner as he calls out to by-passers to lend him money. M-PESA