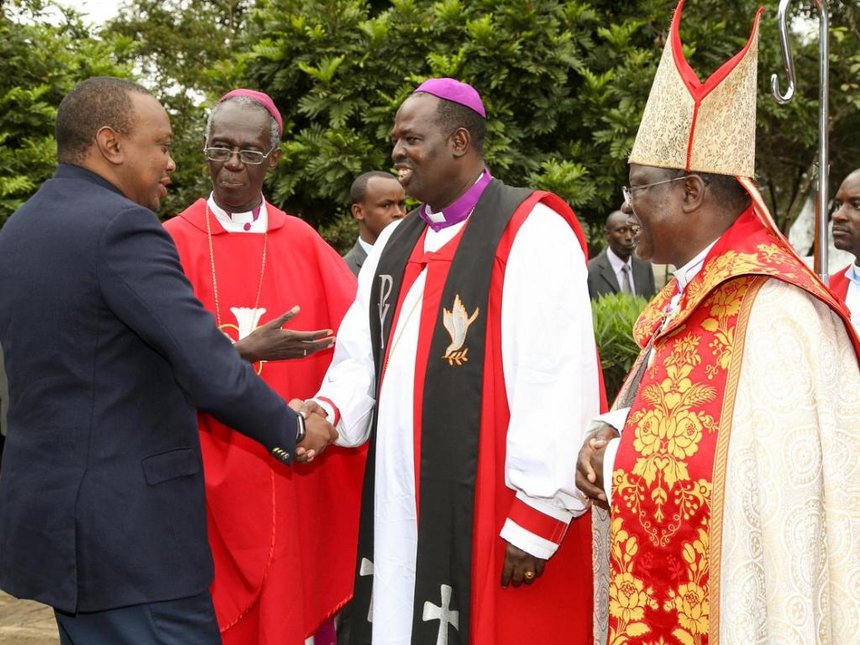 President Uhuru Kenyatta during the the enthronement of new Anglican ArchbishopJackson ole Sapit at All Saints Cathedral in Nairobi, July 3, 2016. /PSCU

Sapit, 52, was enthroned at All Saints Cathedralon Sunday as the 6th archbishop of the Anglican Church of Kenya.

“That task is not easy,” Uhuru told him, but said they will work together.

Uhuru said Sapit has a “very big pair of shoes” to fill as his predecessor Eliud Wabukala made Kenya proud.

“I wish Archbishop Sapit God’s blessings in this journey, assure him of my support,” he said.

“I know Sapit is up to the task, to build an even stronger, firmer church for all of us.”

Deputy President William Ruto congratulated Sapit and prayed for grace and courage to rebuke wrong and support what is right.

Ruto asked the Archbishop to pray for leaders and God to grant them wisdom to lead Kenya in the right direction.

“We will say no to hate and refuse ethnicity as a standard for our engagement,” he said.

Eight politicians were arrested and detained over hate speech charges. Amid talk that has been termed inciting, Kenyans have raised fears of violence during the 2017 general election.

Sapit promised that the ACK church will be in the forefront of the fight against vices.

“The church must remain accountable in all her endeavors in order to make others accountable. The time is ripe to train social media pastors to meet the society’s needs,” he said.

Sapit called upon leaders to ensure the full implementation of the 2010 constitution in all circumstances.

“I pray that the President, the DP and the opposition may take a retreat and talk about the beautiful Kenya they want to see,” he said.

Sapit who is from the Kericho Diocese was declared Anglican Church of Kenya Archbishop-elect on May 20.

Sapit will also be the 4th diocesan bishop of the All Saints Cathedral Diocese.

He replaces Wabukala, who retired in June. Wabukala, also chair of National anti-Corruption Steering Committee, had headed the church for seven years.