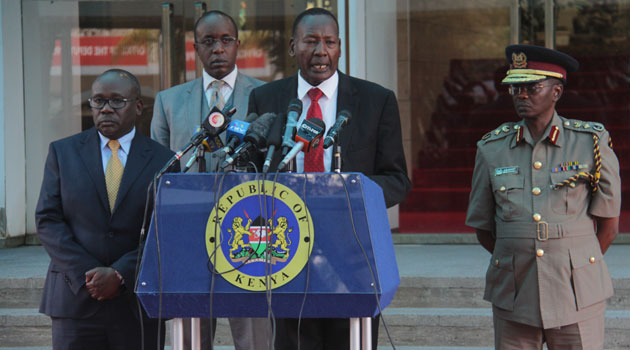 The government has banned all protests by the Coalition for Reforms and Democracy (CORD) which on Monday claimed two lives, left scores injured and property destroyed.

Interior Cabinet Secretary Joseph Nkaissery warned that the consequences will be grave for any person who will contravene the directive.

“Demonstrators armed with stones, machetes and other crude weapons, barricading of roads using burning tires and destruction of private and public property worth millions of shillings have been witnessed.”

“Clearly, these demonstrations are not within the parameters set out by the Constitutional Court at the behest of CORD,” he said.

Nkaissery said despite the government respecting the court order allowing the Raila Odinga-led protests, the Opposition had failed to honour the promise of ensuring they remained peaceful.

“It is extremely dangerous for anybody to challenge the government decision. The consequences are grave. This is an order and they will have to comply with it.”

Addressing a press conference on Tuesday evening, the CS condemned Monday’s incidents in Kisumu, Migori and Siaya, where police were attacked and property worth millions destroyed.

“The primary responsibility of the government is protection of life and property through maintenance of law and order,” he said.

Nkaissery was accompanied by the Inspector General of Police and Attorney General Githu Muigai, who said the court cannot protect violent protests.

“The Constitutional Court did not and I dare say cannot issue an order protecting a violent rioter assembly,” the AG asserted. “The constitutional court issued an order that protected the right to peacefully assemble and demonstrate.”

In a quick rejoinder, CORD Co-Principal Moses Wetangula said the ban on the demonstrations was “illegal, unconstitutional, unreasonable and reminiscent of strong arm tactics deployed by undemocratic and retrogressive leadership.”

He said the directive violates Article 37 of the constitution that guarantees demonstrations and picketing.

“The Executive cannot purport to ban demonstrations. This is a constitutional right that nobody can withdraw. I urge the Executive to socialise with article 37 of the constitution,” the Senator said.

CORD had warned of increasing the numbers of their demonstrations to two days, if the government failed to select a special team, for their proposed electoral reforms dialogue.

Inspector General of Police Joseph Boinnet made it clear his officers would “enforce the order” issued by Nkaissery Tuesday.

Gov’t Bans CORD Protests ‘To Protect Life, Property’ [VIDEO] The government has banned all protests by the Coalition for Reforms and Democracy (CORD) which on Monday claimed two lives, left scores injured and property destroyed. Interior Cabinet Secretary Joseph Nkaissery warned that the consequences will be grave for any person who will contravene the directive. “Demonstrators