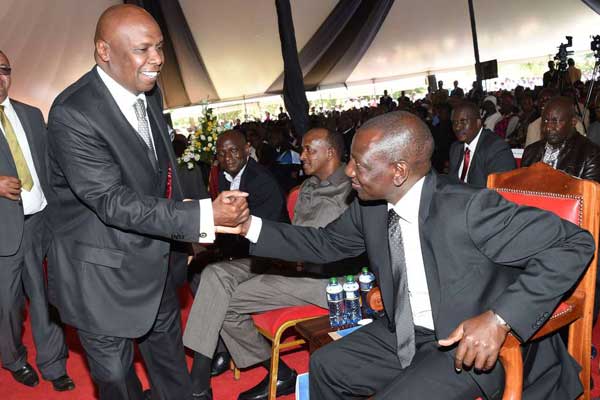 Kericho Governor Paul Chepkwony has offered to lead talks between Deputy President William Ruto and Baringo Senator Gideon Moi in a bid to unite Rift Valley region ahead of the 2022 General Election.

Speaking during an interview with Kitwek FM, Prof Chepkwony said there was no need for animosity between supporters of the two camps, adding that it was fuelling further divisions within the community.

Mr Ruto is the deputy leader of the ruling Jubilee coalition and is the party’s perceived presidential flag bearer for the 2022 polls, while Mr Moi is the Kanu chairman. He has not stated publicly whether he will run in 2022.

While both leaders deny any perceived rift between them, their lieutenants have been making accusatory statements. Prof Chepkwony said this should not be the case.

“Both are our sons. We would not wish any of them to perish. It is my hope that the Kalenjin people come together and speak in one voice. That way we can achieve great things. I want to see the two shaking hands,” he said.

Prof Chepkwony, who was elected on a Jubilee ticket, called on the allies of both Mr Ruto and Mr Moi to drop hardline stances and reconcile.

He said unnecessary heated exchanges during political events were “embarrassing” the community.

During the victory party for Bureti Member of Parliament Japheth Kiptergech Mutai in Kapkatet, Kericho County, last month, supporters of DP Ruto and Mr Moi differed in the presence of the Deputy President over whom to support.

Two weeks later, at the funeral of Baringo South MP Grace Kipchoim, supporters of Mr Ruto hit out at the Baringo Senator, accusing him of undermining the Deputy President.

The second term governor said a meeting would help supporters of both sides vent their anger and chart the way forward.

But Prof Chepkwony is convinced that the two leaders can be reunited, observing that having served in the Kanu party albeit at different times, both Mr Ruto and Mr Moi had a long term connection.

“It is embarrassing to see some politicians fuelling this disagreement by hurling insults at others instead of seeking to cool it down. We need to help them meet and talk instead of creating further division,” added Prof Chepkwony.

The second term governor said a roundtable meeting would be important to allow supporters of both sides vent out their anger and then agree on a way forward for the community ahead of the next general election.