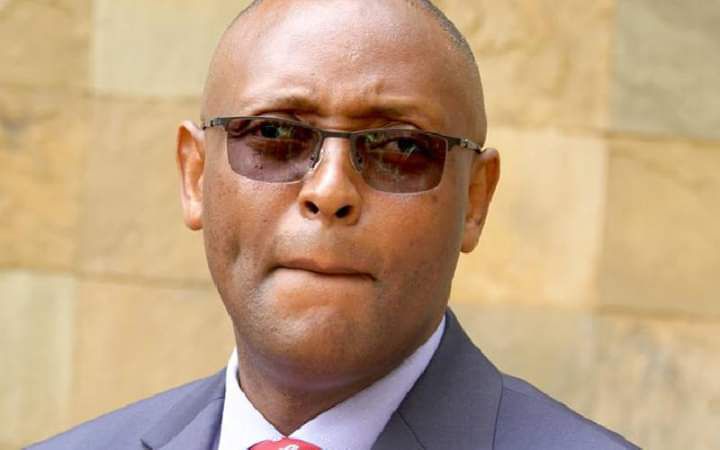 Taita-Taveta Governor Granton Samboja during a press conference in Nairobi on Wednesday, July 24, 2019, when he gave updates on the quest for dissolution of his government after disagreements with MCAs. [David Njaaga, Standard]

The MCAs have accused Governor Samboja of gross misconduct.Three MCAs were absent during the heated afternoon session which preferred ouster of the county chief. Recently, Governor Samboja said he would petition the president to have the county government dissolved.Several political leaders have joined the mediation efforts to settle the disputes but none have yielded fruits.Broken relationshipMr Samboja and the MCAs have for long been embroiled in sharp disagreement which paralysed the implementation of the 2019/2020 budget.The disagreement started in August 2019 when the MCAs slashed the budget allocated for the Executive and set aside Sh833 million for the Ward Development Fund.

This irked the governor who declined to endorse the budgetary proposals. The county assembly members then resorted to the reconciliation process with him but there was no breakthrough.“If it has to take a gesture of goodwill from the county Assembly to end this standoff, then so be it. We are doing exactly that today. We wish to inform the public that we are keen to put this standoff behind us and seek a lasting solution to the problem,” said Assembly Speaker Meshack Maganga on August 5, 2019.The County Chief, however, remained adamant that he would not dialogue with the MCAs. At the time, he re-affirmed his position through County Spokesperson Dennis Onsarigo.“The governor has not changed his earlier stand in the ongoing stalemate and there is no room for dialogue with the legislative arm,” said Onsarigo.Samboja then embarked on a plan to dissolve the county government and gathered 50,000 signatures for the move.The narrative later changed on August 13, 2019, when the MCAs hatched a plan to impeach him as they accused him of being a stumbling block.“The governor has become a stumbling block in our efforts to resolve the budget impasse, something that the assembly cannot stomach anymore,” said Jason Tuja, the Majority Leader.”We have exhausted all avenues available. Our next move is to impeach him.”The implementation of the 2019/2020 budget had remained a pipe dream.Taita Senator Johnes Mwaruma and local MPs Danson Mwashako, Andrew Mwadime and Jones Mlolwa supported Samboja’s quest to dissolve the county while Woman Representative Lydia Haika and Taveta MP Naomi Shaban sided with the MCAs.Frantic efforts by the Deputy President William Ruto, ODM leader Raila Odinga and even Wiper leader Kalonzo Musyoka to hammer deal and find an agreement between the two sides have hit a snag.