by samrack
in Africa, Kenya, News, Trending Elsewhere
A A
0

Deputy President William Ruto has celebrated the Court of Appeal decision to uphold the High Court ruling that declared BBI unconstitutional, null and Void.
While celebrating, DP Ruto thanked God for stopping what he believed was a coalition of the unknown he continued to drum for his bottom-up economy plan.
‘GOD,our heavenly FATHER has come THROUGH for Kenya & STOPPED the COALITION of the known, the mighty, & the powerful from destroying our CONSTITUTION.Our GOD,help the ALLIANCE of the unknown, the jobless,the Hustlers & struggling farmers to now ENGINEER our ECONOMY from BOTTOM UP,” DP Ruto tweeted. 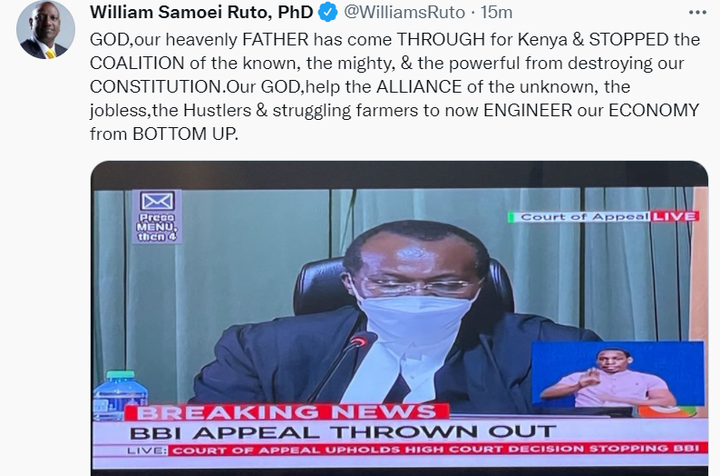 Court of Appeal Seven Judges led by Justice Daniel Musunga said that the Building Bridges Initiative Amendment Bill did not follow the constitutional and it was the right of the common Mwananchi to make or call for any constitutional amendment.
They further cited that President Kenyatta is not legally allowed to use the popular initiative route to propose changes to the supreme law.

For a referendum to happen, Judges upheld that a proper constitutional procedure had to be followed before a referendum could be declared. The processes include Civic Education, Public Participation and Debates in all County of Assemblies.
They also declared that the Independent Electoral and Boundaries Commission was not full to allow any referendum proceedings considering that it had only 3 commissioners during the birth and drumming of the entire bill to the collection of signatures.
They further noted that Creation of the 70 constituencies is unconstitutional. Political elitism and lack of transparency that characterised the entire BBI process was the great impediment. The President does not enjoy absolute immunity, he is subject to the Constitution and can be sued for personal acts but not for actions or omissions in performance of his official duties.

BBI Ruling: Only 16 lawyers will be allowed in court