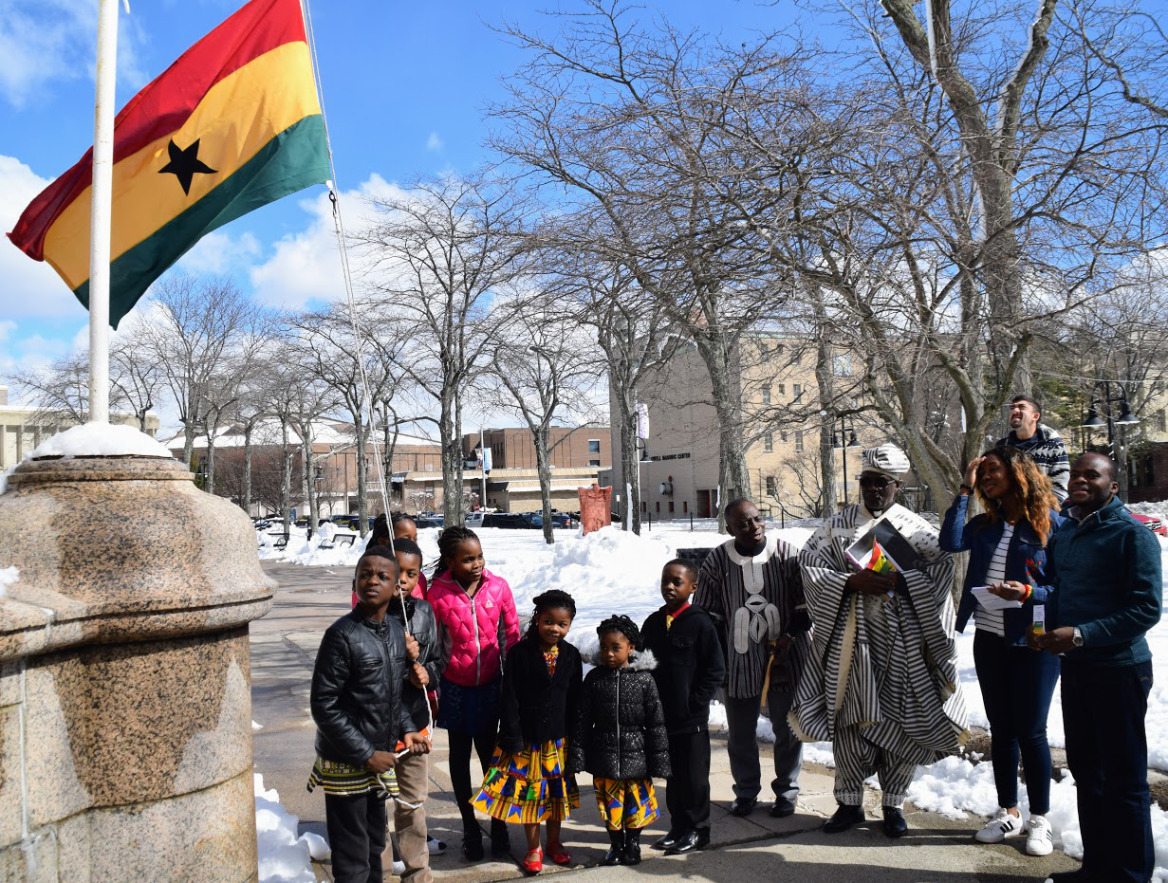 Former Mayor Edward Kennedy calls its one of his “absolute favorite flag raisings.”

And those in attendance at City Hall this past Saturday found out just why.

On March 10th, members of the Ghanaian community of Greater Lowell celebrated their 61st independence day with a jam-packed afternoon of music, dance, food, and thoughtful discussion.

African Community Center of Lowell executive director Gordon Halm has been intimately involved in this tradition since he helped organize the very first Ghanaian flag raising in 2001. Halm, who interned in the Lowell Mayor’s office during the term of former mayor Patrick Ó. Murphy, presided over the 2018 edition, beginning with a musical performance in the City Hall lobby.

The ceremony then moved outdoors for the actual flag raising itself.

The rest of the day’s festivities took place in front of a standing room only crowd in the Mayor’s Reception Room.  Yaw Brefo served as the program coordinator for the event, while Sandra Ennin was the MC.

Following an opening prayer from King Williams and the reciting of the Ghana pledge by Catherine Antwi, Hannah Kyerematang-Martinez gave an overview of the history of the event.  The Pentecost Youth Choir also performed the national anthems of the United States and Ghana.

Vice Chairman Nuon congratulated the group on the growth of the independence day celebration from a small service at a local church to one of the annual highlights of the Lowell City Hall calendar.  He also noted some of the parallels between the Ghanaian community and his own Cambodian American experience.

Following remarks from the other city councilors in attendance, Councilor Nuon presented the event organizers with a proclamation from Mayor William Samaras, celebrating the 61st anniversary of Ghanaian independence.

The ceremony continued with a keynote address by Judge Jay D. Bliztman.

Blitzman spoke about democracy and the rule of law, referencing the story of John Adams.  Prior to becoming the second president of the United States, Adams was a well-renown lawyer in Boston, who actually represented the British soldiers accused in the Boston Massacre.  Despite believing in the revolutionary war movement, Adams also believed that everyone still deserved a fair trial.

Following the formal program, the celebration continued in the Mayors Reception Room with cake, drinks, and traditional Ghanaian treats.

Despite the cold temperatures, the warmth of the celebration inside Lowell City Hall was felt by all.   In the end, its safe to say the Ghanaian Flag Raising was a fan favorite once again.

Ghanaian flag-raising in Lowell Reviewed by samrack on July 4, 2018 .

Ghanaian flag-raising in Lowell Former Mayor Edward Kennedy calls its one of his “absolute favorite flag raisings.” And those in attendance at City Hall this past Saturday found out just why. Gordon Halm On March 10th, members of the Ghanaian community of Greater Lowell celebrated their 61st independence day with a jam-packed afternoon of music,