Gay Rights A ‘Non-issue’ in Kenya, Uhuru And Ruto Say Ahead Of Obama Visit 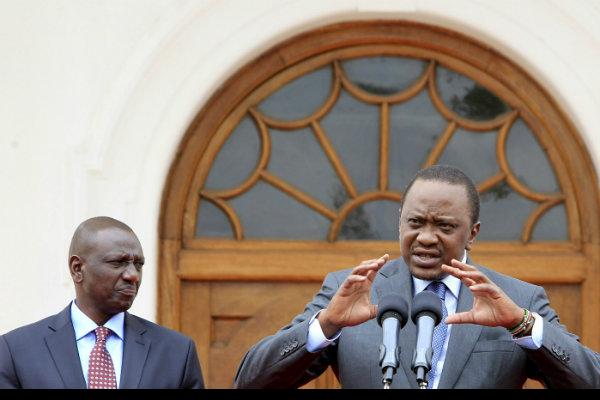 Gay rights will not be discussed during talks with US President Barack Obama, President Uhuru Kenyatta has said.

“The issue of gay rights is a non-issue for us, it is not on the agenda. We have serious issues that we will be addressing,” he said on Tuesday.

Delivering an address at State House, Nairobi, on Obama’s impending visit, Uhuru said Ruto will take part in talks with the US President.

“Ruto is part of this government. The US President will be hosted by the Kenyan government so he will meet the government including the DP,” he said.

The DP earlier condemned homosexuality in Kenya saying there is “no room” for it in a society that worships God.

He spoke after the US Supreme Court legalised gay marriage in all 50 states.

Ruto is also facing charges at the ICC; the US warned Kenyans against electing Uhuru and Ruto because of cases at The Hague-based court over crimes against humanity.

The ICC dropped charges against the president, in connection with the 2007-08 post-election violence, while Ruto’s case is ongoing.

Uhuru cited energy, health, trade and security as some of the topics that will be discussed.

He said he has welcomed cooperation with the United States in the war against terrorism and corruption.

‘We expect to get insights on good governance and democracy, the two things that bind Kenya and the US,” he added.

“Our discussions will eventually lead to deals that will improve our economy. We will seek IT partnerships, and investments in energy and tourism.”

Uhuru further said the summit will increase the entrepreneurial spirit among Kenyans and improve international relations.

The conference has reaffirmed Kenya’s reputation for enterprise and innovation, he said, adding that attendants will benefit greatly from Obama’s insights.

He challenged those who doubt the strength of Kenya and US relations to re-examine their assumptions.

“Our friendship with the US dates back to pre-independence. We look forward to partnerships, prosperity and innovations to overcome our challenges,” he said.

Saying Kenya has potential that is yet to be tapped, Uhuru said the summit will be an opportunity to open up to investors from America.

“None of us should want to escape the reality that we live in an interdependent world. We will strengthen business ties between the two nations. This is our event and we have a chance to pitch our ideas at the summit,” he said.

He encouraged the exchange of ideas among African delegates, noting that half of the attendants will be from neighbouring countries.

Uhuru said he will also discuss direct flights to America during bilateral talks with Obama, adding that he hopes outstanding issues will be resolved.

He said discussions with American authorities, on fast-tracking the introduction of the flights, have been ongoing.

Obama will jet into the country on Friday and leave on Sunday.

He and Uhuru will address a joint press conference on Saturday afternoon, and he will speak at Safaricom Stadium Kasarani on Sunday.

The two leaders will co-host the 6th Global Entrepreneurship Summit taking place at UN, Gigiri, from July 24 to 26.

See more at: The Star

Gay Rights A ‘Non-issue’ in Kenya, Uhuru And Ruto Say Ahead Of Obama Visit Reviewed by samrack on July 22, 2015 .

Gay rights will not be discussed during talks with US President Barack Obama, President Uhuru Kenyatta has said. “The issue of gay rights is a non-issue for us, it is not on the agenda. We have serious issues that we will be addressing,” he said on Tuesday. Delivering an address at State House, Nairobi, on