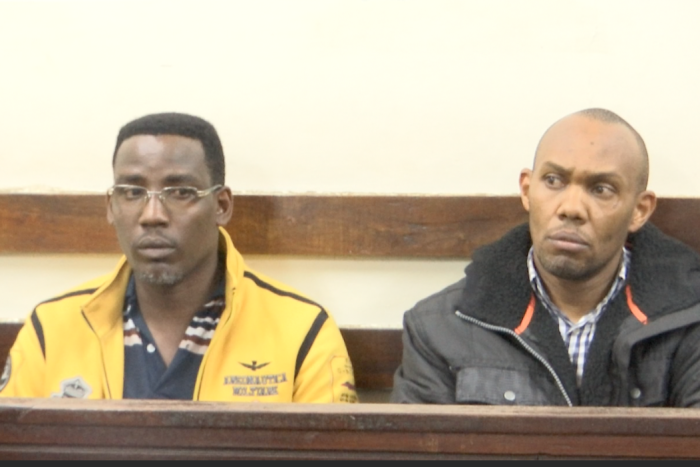 It began so simply. A call to police from a passer-by.

An injured woman was lying motionless on Miotoni Road, in the Nairobi suburb of Karen.

It looked like she had been hit by a car, so the police initially sent traffic officers.

But, they soon realised it was a murder scene.

The woman was not injured, she was dead, with a bullet wound to the neck.

Divisional criminal investigation officer Alfred Ouko was one of the first detectives to arrive.

He cordoned off the road and started looking for evidence.

He quickly found the shell from a 9 millimetre pistol and the bullet itself.

It had travelled through the woman’s body and exited through her back. She was shot at close range.

Her small bag containing her mobile phone and a purse, was stolen. It is yet to be recovered.

Only a few minutes earlier, a British man who lived nearby had driven along Miotoni Road.

He had a dashcam camera and it showed Gabrielle Maina walking along with her son as she took the boy to a friend’s place to play.

The man with the dashcam had to return home, because he forgot something.

The second time he drove along the road, his camera captured Ms Maina walking home alone after dropping off her son.

PHOTO: Australian Gabrielle Maina was the head teacher at an international school in Kenya. (Facebook)

But, it would be the last time she was seen alive. It was the morning of Thursday, October 19.

People started gathering at the scene.

Two gardeners from the nearby Karen Country Lodge had heard two shots and the sound of a motorbike speeding away.

A short time later at 10:22am, Ms Maina’s stolen mobile phone was switched off in the nearby slum of Kawangware. It has been silent ever since.

Kenyan police are now investigating a possible link between the shooting death of Ms Maina and an armed robbery on the same road in March this year.

An American man was jogging and walking along Miotoni Road when he was confronted by two men on a motorbike.

They threatened him with a pistol and stole his mobile phone.

They also demanded he hand over a ring he had on his finger.

But, the ring was stuck, it was too tight and the man couldn’t remove it.

The attackers threatened to cut off his finger, but they fled just before another vehicle passed the scene.

The thieves made efforts to sell the American man’s mobile phone in the coastal city of Mombasa.

It was later recovered in the slum of Kawangware, the same location where Ms Maina’s phone was last located.

Three men have been charged with robbery and one with receiving stolen goods in connection with the theft of the man’s phone.

All the suspects were in prison, awaiting trial when Gabrielle Maina was killed.

But, police are investigating whether there may be a stolen mobile phone syndicate operating from Kwangware.

PHOTO: Gabrielle Maina was last seen walking along a road in a suburb of Nairobi. (Twitter: Hillcrest Schools)

Detectives are keeping an open mind. They don’t know whether the shooting of Gabrielle Maina was a botched robbery or a targeted killing.

Both men were released without charge last week, after spending seven days in custody.

Police initially examined calls and text messages sent and received on the men’s phones over the past month.

Now, the analysis will be extended by a further six months, back to February 19.

Both men have maintain they are innocent.

Witnesses and phone records show they were on the other side of Nairobi at the time of the shooting.

Their lawyer says they will continue to cooperate with police.

Ms Maina was granted a restraining order against her husband in April this year.

She accused him of harassing her at home and at her workplace, the Hillcrest International School in the Nairobi suburb of Karen.

Gabrielle and Cyrus met in Australia and were married in 2001.

She moved to Kenya in September 2015 and took up a job at Hillcrest.

The marriage started to breakdown. The couple was separated, but sharing custody of their two sons.

PHOTO: Emmanuel Simiyu Munyole says his relationships with Gabrielle Maina was nothing more than a friendship. (ABC News)

Ms Maina developed a strong friendship with a male sports teacher who was on a temporary contract at Hillcrest, Emmanuel Simiyu Munyole.

She provided financial support to the young married man when he was out of work and sometimes employed him on a casual basis to teach sport to her sons and neighbouring children.

Mr Munyole was also given regular use of Ms Maina’s car, which was registered in the name of her husband.

Mr Munyole says the relationship was just a friendship.

“To me, I felt she was from a different planet or different world. She was so kind hearted.”

Mr Munyole’s employment at the school was terminated in March. He says he wasn’t given any reason.

Police say colleagues observed she was stressed and not performing well, and arrangements had been made for another teacher to take over some of her duties when term was scheduled to start on October 23.

She had dropped off the car for him to take to be serviced the following morning.

She sent him a final text message at 7:38am on the morning she was killed, checking on how things were going with the vehicle.

“The day before her death, I spent the whole day with Gabrielle … I had her car, which I was to take for service that morning,” Mr Munyole says.

“She sent me a text saying, ‘Let me know how today goes’. We would have met later in the day.

“It’s haunting me and I wish she could come back and I could tell her how sorry I am that I didn’t respond.”

Mr Munyole is not regarded as a suspect and has been cooperative with police.

But, detectives are examining the mobile phone of his wife, Irene Mwangi, to check for any threatening messages or information connected with the case, over the past six months.

So far, they have found nothing.

Police have conducted extensive searches of Ms Maina’s home, including her personal diaries and journals in the hunt for a killer and a motive.

Officers have also questioned a young female domestic worker, who had only been working for Ms Maina for six days before the killing. She was cleared of any suspicion.

A funeral service for Ms Maina was held yesterday in Nairobi.

Some of her ashes will remain with her husband’s family in Kenya, while the rest will be sent home to Australia.

The investigation into her death is continuing.

Share thisFacebookTwitterPinterestEmailWhatsAppJohn Njuguna Waithira (L) and Cyrus Bernard Maina Njuguna (R) have been released without charge. ABC News Gabrielle Maina: Kenyan police pursue new leads in shooting death of Australian teacher It began so simply. A call to police from a passer-by. Key points: Police investigating if any link between Ms Maina’s murder and robbery on