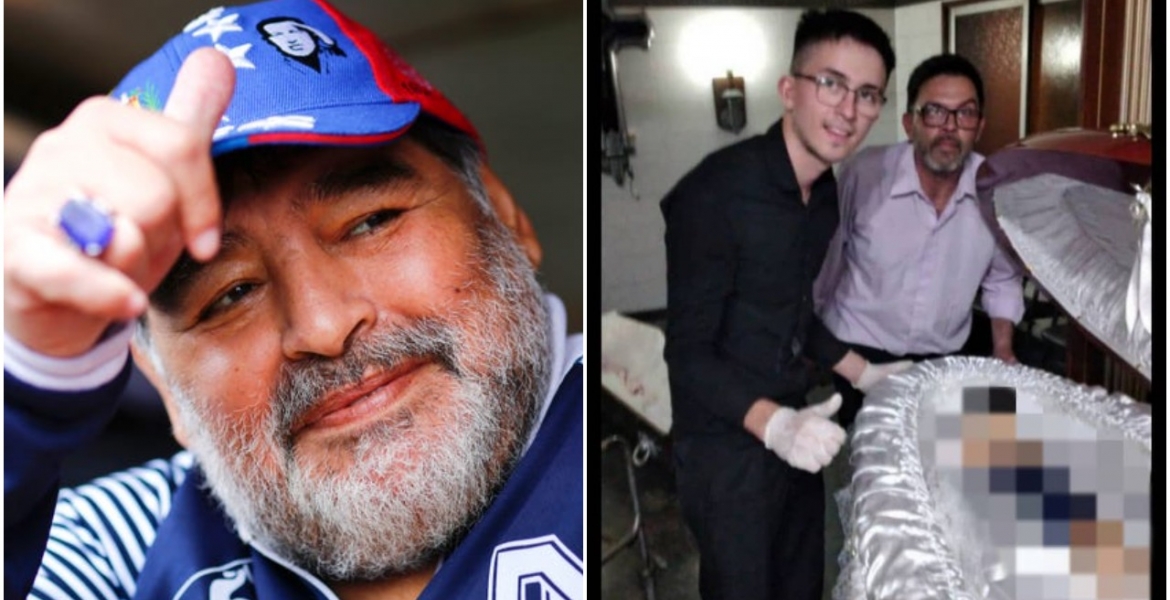 A funeral home worker has been axed after he took photos next to the body of the late Argentina football legend, Diego Maradona who died on Wednesday aged 60.

One image showed Ismael doing a thumbs-up gesture and touching the forehead of the football icon.

It was reported that the three had been hired to prepare the body for the wake at the presidential palace in Argentina’s capital Buenos Aires. The body was put in a wooden coffin that had the Argentina flag colors.

The three are said to have posed for the picture before handing it over the body to the presidential palace.

After the images went viral online, the owner of the funeral parlor announced he had fired Fernandez, who has since apologized for the incident.

“It was something instantaneous. I’d just raised my head and my son did it like any kid of 18,” Fernandez told Radio Diez.

“We were getting ready to take Diego to the wake and my son, being a typical youngster, made the thumbs-up sign and had his photo taken. I ask for everyone’s forgiveness. I’ve worked for Maradona’s father and his brother-in-law. I’ve been close to Diego while he was alive. I would never have disrespected him while he was alive because he was my idol and it was not my intention after he died.”

“I know a lot of people have been very offended and have taken it badly. I know it upset them. I ask all of them to forgive us,” he added.

Maradona’s lawyer Matias Morla has vowed to take legal action against the three. The former Napoli and Barcelona star was laid to rest in a private ceremony on Thursday.

Share thisFacebookTwitterPinterestEmailWhatsAppFuneral Home Worker Fired for TakingPhotos with Diego Maradona’s Lifeless Body A funeral home worker has been axed after he took photos next to the body of the late Argentina football legend, Diego Maradona who died on Wednesday aged 60. Pictures shared online showing the worker identified as Claudio Fernandez, his son Ismael and