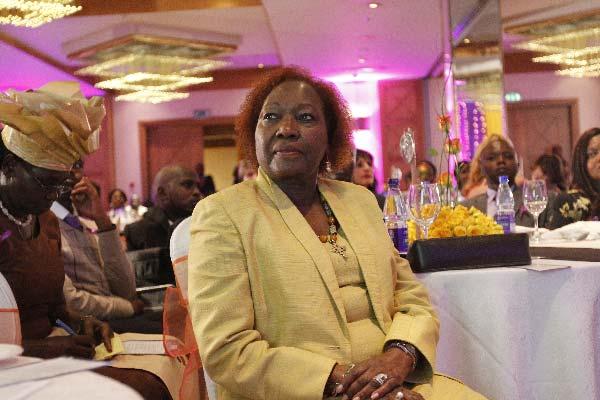 She has shared her experience many times, but last week former Health minister Beth Mugo moved African first ladies to tears when she – for the first time – revealed how she desperately struggled to hide from the media the shocking news of her cancer diagnosis.

Mugo, currently a nominated senator, also hid from public for months as she painfully absorbed the impact of the 2011 diagnosis.

“When you’re first diagnosed with cancer, you feel this is it…..I am going to die. I had told my doctor to keep my file under lock and key and especially the press must not see it,” Mugo told the 12 first ladies on Monday.

Some of them choked back tears as the 76-year-old politician bravely shared fresh details of her experience.

“You have to come out of that shock fast enough to be able to confront what’s ahead of you,” she said.

Mugo was diagnosed with breast cancer in 2011 during a routine medical checkup in Nairobi. A mammogram initially missed the lump, which she could confidently feel in her breast.

She sought a second opinion where a CT scan confirmed the lump, which turned out to be cancerous.

She initially sought treatment in the US where the lump was completely removed. However, she was expected to receive several chemotherapy regimes in the US and Kenya the following years.

On Monday, Mugo was one of the four survivors who narrated their emotional experiences at the 9th Stop Cervical, Breast and Prostate Cancer Conference in Nairobi.

Deputy head of the International Atomic Energy Agency Dr Kwaku Aning, a Ghanaian scientist, revealed how his family has been afflicted by the disease.

“I come from a cancer family,” Dr Aning said. He was successfully treated for prostate cancer but his father and several relatives have succumbed to various cancers mainly due to late diagnosis and poor treatment.

Cancer results from cells that uncontrollably grow and do not die. Some form lumps, which may eventually rupture into wounds.

It is usually not possible to know exactly why one person develops cancer and another doesn’t. But US’s National Cancer Institute says certain factors may increase a person’s chances. Although some of these risk factors—like family history or growing older—cannot be avoided, others—like lack of exercise, bad diet, polluted environment and using tobacco—can be avoided.

Beth Mugo finally disclosed to Kenyans her diagnosis at a press conference in January 2012.

Last Monday, she revealed how that move troubled her. “When I went public, I wondered if this was the right thing I should have done.”

Mugo says she now believes that was the best decision. “It reduced stigma in the society. Cancer is a disease like any other. We shouldn’t be surprised that one has cancer. When I was diagnosed I went through very strenuous treatment. But my family and Kenyans supported me. Without my family I wouldn’t have handled it,” she says.

While Mugo was the second public figure, after Medical Services Minister Prof Anyang Nyong’o, to make their cancer diagnosis public, in reality, thousands of Kenya were dying unnecessarily without proper diagnosis or treatment.

The Ministry of Health’s 2013 national cancer treatment guideline estimates that 39,000 Kenyans every year test positive for cancer, while 27,000 others succumb to the same disease. Sixty per cent of those affected are less than 70 years old.

Breast and cervical cancer are the most common among women while prostate cancer leads among men.

Mugo now implores women at every opportunity to get tested. She was lucky the breast cancer was diagnosed at stage one, and stood good chance of successful treatment.

She advises women above 40 years to have an annual clinical breast exam and do a monthly self-exam. Those from families with history of the disease should begin about 10 years earlier. They should not panic if a lump is found — about 80 percent of biopsied breast lumps are benign.

Mugo notes that cancer treatment is expensive. However, Health Cabinet Secretary James Macharia says all the treatment is now covered by the National Health Insurance Fund because of increased contribution rates.

Screening for breast and cervical cancer is free in most public hospitals above level four.

When picked early, these cancers are easily treated and cured. Girls below 12 years should also get the three-dose series of HPV vaccine to prevent cervical cancer.

“The good news is that, Africa now has a great opportunity to do more – through early screening and treatment – of cervical and other cancers,” she said.

Mugo says this cannot be left to governments alone, and urges the private sector to chip in. She advises those diagnosed with the disease to stay calm. “Don’t panic when you’re told you have cancer, because you can live.”

Mugo was finally declared cancer free in 2013. She says: “My oncologist told me, Beth, what will kill you will not be cancer. It will probably be old age.”

Fresh details of Beth Mugo’s cancer testimony that moved Africa First Ladies to tears By John Muchangi She has shared her experience many times, but last week former Health minister Beth Mugo moved African first ladies to tears when she – for the first time – revealed how she desperately struggled to hide from the