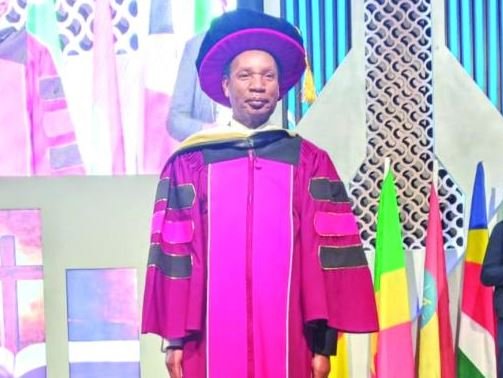 Had he chosen to retire to Lelwak village in Nandi County, perhaps the veteran politician could not have attained the feat of joining the club of Doctor of Philosophy degree (PhD) holders.

Kosgey chose to pursue leadership management in a theological university after he quit active politics following unsuccessful senatorial and governorship bids in Nandi in 2013 and 2017 elections respectively.

“Now that I found time away from the busy schedule I had in politics, I focused on what I like – reading books. I am grateful to God for the good lifestyle that allowed me to concentrate on studies,” he said.

The 73-year-old former MP was among the five PhD graduands during Pan Africa Christian University’s 39th graduation ceremony in Nairobi, last week. He graduated with a PhD in Strategic leadership. His thesis was on ethical leadership and governance in counties.

The former minister wants to be a role model in advocating transformational leadership, with high moral standing and integrity in the society as enshrined in Chapter Six of the Constitution 2010.

Kosgey was determined to complete his academic journey, 48 years after obtaining a Bsc (Chemistry) from University of Nairobi in 1972, then University College of East Africa.

He described former President Moi as his mentor. He was first elected MP for Tinderet at a tender age of 32 in 1979, and Moi named him into his first Cabinet.

In a telephone interview with The Standard at the weekend, Kosgey said: “President Moi is my mentor, and I am a role model to many. It has been a long journey in my studies, and I am very happy with my achievement at my age.”

“I have no regrets because I have made it. I want to inspire more people and especially the youth. They don’t have to wait until my age. Now with technology, Kenyans with first or second degrees should further their studies using online opportunities,” he said.

Kosgey encouraged Kenyans to shun lifestyles that could ruin their future and instead focus on boosting livelihoods.

“I served in many ministries including Education, which is paramount. I attended Unesco meetings where we advocated for education for all towards attaining millennium development goals,” he said.

The former MP decried rampant corruption, saying some implicated leaders are fighting to retain their offices instead of resigning as is the case in developed economies.

“We should not stoop too low and allow vices that erode integrity and our economy. Kenyans need to work hard. Even the hustler mentality should not destruct us from achieving goals through hard work,” he added.

Former Cabinet Minister attains PhD 48 years after his first degree After retiring from a successful political career that spanned more than three decades, former Cabinet Minister and Tinderet MP Henry Kiprono Kosgey (pictured) turned to his passion – books. Had he chosen to retire to Lelwak village in Nandi County, perhaps the veteran politician