KFC Food chain to open another drive-through outlet in Nairobi 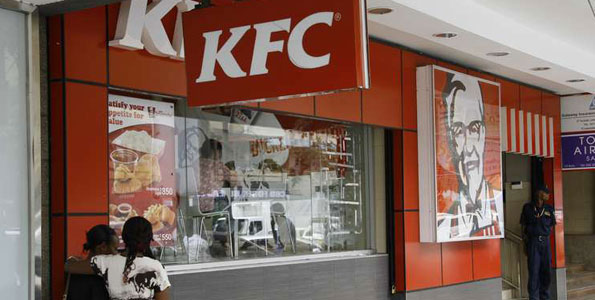 Food chain to open another drive-through outlet in Nairobi

Global fast food franchise Kentucky Fried Chicken (KFC) is set to open a second drive-through outlet on Thika Road, a year and a half after opening the first such branch at the Total Petrol Station on Mombasa Road.

Construction has already started for the US-based food chain’s eleventh branch located at the Shell Petrol station opposite the KCA University.
It is set to be opened in September this year.

The fast-food chain plans to open three more branches in Kisumu, Nakuru and Nanyuki before year-end. The firm is expected to spend about Sh350 million ($3.5m) on its 2016 expansion plan. The Thika Road outlet will see customers order, pay and pick up their food while still in their cars.

The franchise is promising customers a service time of between two and five minutes from the point of making an order to the point of exit.

“Like the Mombasa Road outlet, customers visiting the Thika Road branch will be served while still in their cars-which works really well for people that are in a hurry and don’t have time to park their cars,” said Justin Melvin the general manager for Kuku Foods- the KFC Kenya franchise holders.

The Thika Road branch comes after the opening of the Hub Karen outlet earlier this year and is part of Kuku Foods’ aggressive expansion, which has seen it open its second Central Business District (CBD) branch along Mama Ngina Street and another at the Garden City mall.

These global players are turning to emerging markets such as Africa for growth, attracted by rising disposable household incomes, fast economic growth and a young population, according a study by McKinsey & Co.  Nairobi’s position as a hub for multiple multinationals has also attracted the global restaurant chains.

The entry of these eateries is also aimed at tapping the emergent fast food culture that is driven by changing lifestyles and growing appetite for exotic foods.

KFC Food chain to open another drive-through outlet in Nairobi Reviewed by samrack on June 16, 2016 .