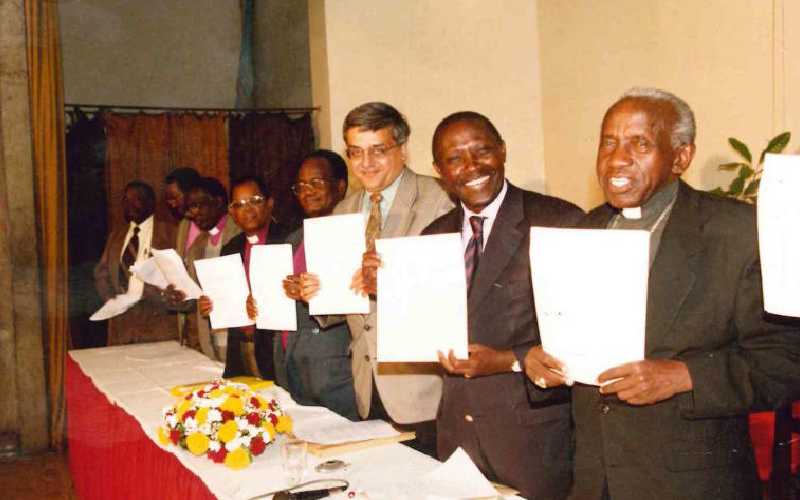 Archbishop Ndingi Mwana a’Nzeki (right) and other leaders hold a draft constitution during the push for reforms. [File, Standard]

Fearless cleric who fought for the poor

n Nakuru County, Ndingi was a priest who gave his life to the service of the church and community and didn’t shy away from stepping on politicians’ toes.He burst into the limelight when he opposed mlolongo (queue) voting system during the 1988 General Election.His boldness and the need to have a just society was reinforced at the height of 1992 ethnic clashes when he risked his life by supporting victims of tribal clashes in the Rift Valley.Many who interacted with Ndingi at that time recall his fearlessness in condemning the ethnic violence that claimed hundreds of lives in the Rift Valley.

Fearless cleric According to Joe Ngugi, a former Nakuru journalist who is now a researcher at the Senate, Ndingi was tough, fearless and a straightforward cleric who never minced his words.

“I remember very well when he told off the then Head of State who had arrived with his entourage while mass was going on at Christ The King Cathedral.Ndingi, disturbed by the commotion caused by the Head of State’s security, and without mincing words or batting an eyelid, pointed out that it was a church and not a political meeting. The Head of State had to do with a seat amidst the congregation,” Mr Ngugi said.In one of his sermons, Ndingi declared that any politician sponsoring ethnic killings would never be given a platform in any of his churches.Ngugi said Ndingi had a way of relating with the people that he trusted and this was amplified by the way he interacted with the Nakuru journalists whom he used to host for dinner most Thursdays.

“It is during these interactions that the bishop used to seek to know from the journalists what was happening around Nakuru and the issues affecting the people, which they felt the church should address.”Ndingi was also a stickler for rules and a tough disciplinarian. During his tenure in Nakuru, 10 priests were excommunicated for engaging in scandals.Another incident that will forever remain in the mind of many Kenyans – especially those who were in the forefront of fighting injustice, political intolerance and the single party system – was when Ndingi helped to smuggle environmentalist Wangari Maathai to safety at the height of the government crackdown on human right activists in 1993.Although this moment is captured well in Ndingi’s biography A Voice Unstilled: Archbishop Ndingi Mwana a’Nzeki, it is still fresh in the minds of veteran politician Koigi Wamwere.Koigi yesterday described Ndingi as a rare clergyman who used the pulpit to fight for democracy, humanity and social injustice.“Never in the history of this country will we have a man of cloth who stood firmly against ethnic cleansing perpetuated against a community in Rift Valley in the 1990s,” said Koigi in an interview.He recalled an instance on March 3, 1993, when Prof Maathai was invited to a meeting to discuss the rehabilitation of displaced people at Christ The King Cathedral in Nakuru. Ndingi was the bishop there.“To ensure she did not attend, the police placed roadblocks on the Nairobi-Nakuru highway starting March 2.Koigi recalled that the decision to sneak Maathai to the church was a risky and almost impossible mission.But the plot was finally executed with the help of Ndingi and a few priests who sneaked her from Uthiru.In his biography, Ndingi wrote: “The priest arrived at exactly 9.35am. Maathai easily recognised the white Toyota Corolla registration number KAA 203G and walked towards it.””She opened the door and got onto the back seat, slumping down like a patient collapsing. The car started off at a steady speed,” the biography describes the 140km journey to Nakuru.The duo came across the first roadblock at Kamandura/Limuru Road junction. The police waved the slowly moving car on after peering in and seeing a “Somali woman”.The next roadblock was at Delamere in Naivasha, but the officers “were not interested in a rugged looking man wearing a cap and a Somali woman seated at the back”.At Gilgil, it was different as the officers manning the roadblock were not regular policemen, but General Service Unit personnel.They waved down the car and the occupants said a prayer in Kikuyu, “Mwathani utugitire na utuiguire tha (God protect us and have mercy on us).The book narrates how one burly GSU officer asked rudely: “Where are you going?” all through looking at the woman at the back.Other roadblocksThey later drove past other roadblocks, all the way to Ndingi’s house.Governor Lee Kinyanjui said Ndingi’s work was characterised by a great quest for justice to the voiceless masses, even when it meant going against the establishment.”His fiery sermons at Christ The King Cathedral in Nakuru brought hope to many who sought refuge in the church. He was also a humble and passionate true servant of God,” he said.Mr Kinyanjui recalled that during his tenure as the Bishop of Nakuru, the church expanded exponentially in all aspects, including education and health. [Additional reporting by Daniel Chege]

Archbishop Ndingi Mwana a’Nzeki Fearless cleric who fought for the poor Reviewed by samrack on March 31, 2020 .

Archbishop Ndingi Mwana a’Nzeki (right) and other leaders hold a draft constitution during the push for reforms. [File, Standard] Fearless cleric who fought for the poor n Nakuru County, Ndingi was a priest who gave his life to the service of the church and community and didn’t shy away from stepping on politicians’ toes.He burst