Fatal horrific accident along kisii-kilgoris highway. 5 dead 1 fighting for her life.Some university students on their way to a party in Embu. 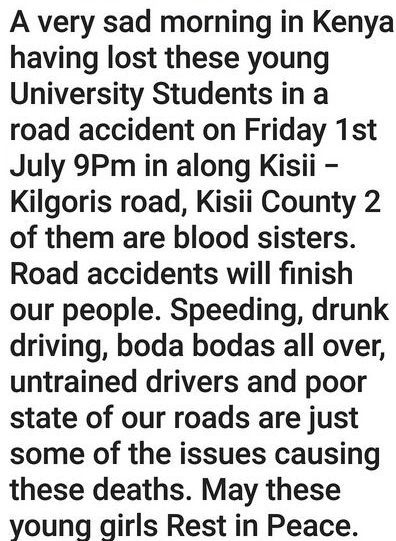 The accident which occurred at Etora, near Sameta, Bobasi sub-county, Kisii County along Kisii- Kilgoris road. Involved a lorry and two cars that collided into it at around 9 p.m.,  July 1, 2016.

Eight confirmed dead by Robert Mulwa, Base Commander, Ogembo whom he said included four men and four ladies. Car drivers died on the spot during the pile-up. The deaseased ladies happen to be Kenyatta University students, two among them being sisters.

The occupants of the Toyota Noah were heading to a party in the locality when they were involved in the painful ordeal. Police had a hard time controlling the large crowd that gathered round the scene of the accident.

The lorry driver succumbed to his injuries moments after being admitted at Kisii Level Six Hospital. Two injured according to Dr Ondari Enoch, one with  head injuries, another with soft tissue injuries. The dead are at Kisii Level 6 mortuary.

Our heartfelt condolences to families, friends and relatives of the deceased. Life tends to take unique painful cycles but we can’t question God’s will. Everything happens for a purpose.