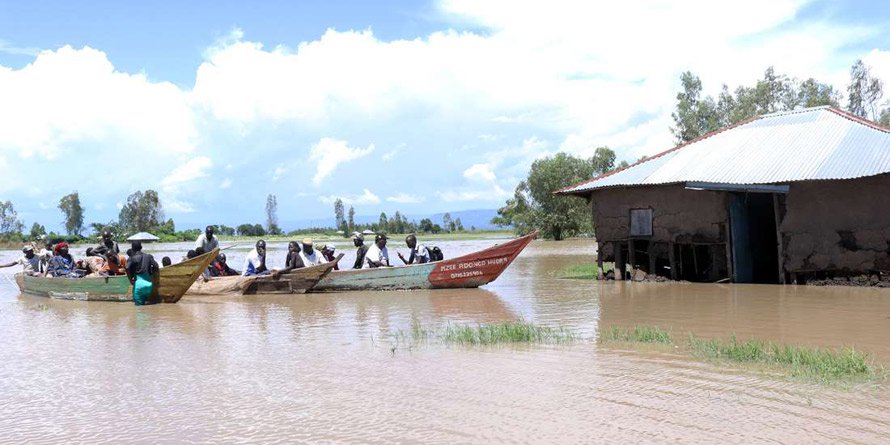 RESIDENTS OF KAKOLA OMBAKA VILLAGE IN KISUMU COUNTY SAIL ON A BOAT AFTER THEIR LAND WAS SUBMERGED IN WATER, APRIL 28, 2018. FILE PHOTO | NMG

Facebook has launched a safety campaign in Kenya by asking its users to point out if they are safe from floods in the country.

Users of the social media platform are getting “Safety Check” notifications asking them to tick an option to indicate they are safe, ask if safe or are not affected.

“People who click the Safety Check notification will also be able to see if any of their friends are in the affected area or have marked themselves safe,” Facebook explains.

If a lot of people in an area are talking about an incident, you may be invited to mark yourself safe using Safety Check.

“We look at a number of factors to determine if you’re in an affected area. These may include: the city you’ve listed in your profile, your current location, if you’ve given Facebook access to your phone or tablet’s location.

Other signals that point to your location (example: the city where you use the Internet),” Facebook indicated.

According to its data, provided by NC4 — an independent global crisis reporting agency — at least 100 people have been killed in flood-related incidents since the start of “spring flooding” in Kenya.

Fifteen counties including Kitui, Baringo, Nyandarua, Kisumu, Isiolo, Kilifi and Tana River have also been affected while about 210,000 people have been displaced, most from Tana River, Kisumu and Isiolo counties.

“More than 3,000 people were rescued from the Garashi and Kakuyuni wards of Kilifi after being trapped by floods.

“Residents living near the banks of the River Tana are being forcibly evacuated as more water is expected to flow down from the Seven Folks dams,” offers the social site.

It adds that widespread damage to crops and roads has occurred, as well as to water and sanitation infrastructure.

The Kenya Meteorological Department director Saumu Shaka Monday indicated that rainfall is expected to continue in several parts of the country with an increased intensity over the central Rift Valley and the Coast region.

Strong winds of above 25 knots (12.5m/s) are also expected over the eastern half of the country.

Ms Shaka, in a seven-day forecast, further indicated that there would be significant increase in rainfall amount and intensity is expected in the coastal region.

Due to the downpour, floods may continue to occur during the first half of the forecast period especially in low-lying and poorly drained areas that have already been receiving heavy rainfall.

“There may also be land slides in areas where the soils have become saturated with rain and flood waters.

“Traffic disruptions may occur in urban areas during heavy downpours,” she warned.

Facebook activates safety alert over Kenya floods Reviewed by samrack on May 1, 2018 .

RESIDENTS OF KAKOLA OMBAKA VILLAGE IN KISUMU COUNTY SAIL ON A BOAT AFTER THEIR LAND WAS SUBMERGED IN WATER, APRIL 28, 2018. FILE PHOTO | NMG  Facebook activates safety alert over Kenya floods Facebook has launched a safety campaign in Kenya by asking its users to point out if they are safe from floods in