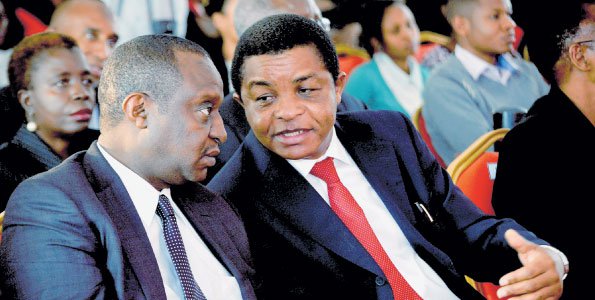 Tax experts have differed sharply on the provisions of an amnesty extended to Kenyans, who have hidden their wealth abroad on condition they return such assets, about three weeks before the cut-off date.

National Treasury secretary Henry Rotich in this year’s Finance Act provided for the tax pardon for income earned up to December 31, 2016, but the Kenya Revenue Authority (KRA) is yet to issue guidelines, leaving experts to speculate on the matter.

Mbiki Kamanjiri, manager in charge of tax advisory at Grant Thornton, termed it a “messy piece of legislation” saying the amendments to Section 37B of the Tax Procedures Act were vague.

“We only get that it is an amnesty on income from foreign sources from the titling of the section. Otherwise the actual provisions do not specify which income is being exempted,” he told the Business Daily in an interview.

The amnesty covers 2016 and the returns for such income must be filed by December 31, 2017, according to the law offering reprieve to wealthy Kenyans who have stashed questionable amounts of cash overseas.

Mr Rotich is also seeking to recover the more than £1 billion (Sh129 billion) looted from Kenyan taxpayers during President Moi’s reign and stashed in offshore bank accounts and prime real estate overseas, according to a forensic study by Kroll Associates.

KRA declined to comment on when it would publish the necessary regulations.

It remains unclear whether the amnesty covers income earned in Kenya and not declared, but somehow secretly siphoned out to tax havens.

“A strict interpretation of this wording could mean that locally earned income which has not been declared previously does not qualify for the amnesty even if such income has been used to create income generating assets that are outside Kenya,” said Michael Mburugu, a tax partner at PKF.

There are also queries as to whether the law offers amnesty in respect to illegally acquired income such as that hidden in Jersey Island by former CMC Holdings chiefs.

“Yes, it (seems to) cover illegally acquired income as the amnesty specifically provides that the source of the income shall not be followed up,” said Shitul Shah, a partner at Daly & Inamdar Advocates.

Another thorny issue is that the tax amnesty requires repatriation of the declared income back to Kenya.

Mr Kamanjiri reckons that the law does not talk of the requirement to physically bring in the cash. “One needs to only declare the income,” he says.

But analysts at KPMG said the Act provides a leeway for the return to Kenya of income that may have been acquired illegally.

Mr Rotich’s statement during the June Budget speech appeared explicit on having the unscrupulous investors return the assets back to Kenya.

“The government is aware that there are taxpayers who own assets and businesses outside the country and would be willing to reinvest back home provided that there is a conducive environment to facilitate such reinvestments,” the minister said.

“Consequently, I propose to declare tax amnesty for such taxpayers provided that they submit their return and accounts for the year of income, 2016.”

He added: In addition, “the government shall not follow up on the sources of such income and assets declared.”

Furthermore, it remains unclear whether the amnesty includes a waiver of criminal prosecution in respect of other associated tax crimes and offences punishable by law such as bribery, money laundering.

Mr Shah said the amnesty is “not applicable in the cases of persons who are already under investigation” by the taxman.

But Mr Kamanjiri said the law offers some form of cover to criminals: “The commissioner may not enquire of the sources of the income.

Further, whatever information one discloses must be treated with confidentiality and for taxation purposes only.”

Experts differ on tax amnesty for Kenyans with cash stashed abroad Reviewed by samrack on December 5, 2016 .

Share thisFacebookTwitterPinterestEmailWhatsAppTreasury secretary Henry Rotich (left) with KRA commissioner- general John Njiraini at the launch of Taxpayers Month in October. PHOTO | SALATON NJAU Experts differ on tax amnesty for Kenyans with cash stashed abroad Tax experts have differed sharply on the provisions of an amnesty extended to Kenyans, who have hidden their wealth abroad