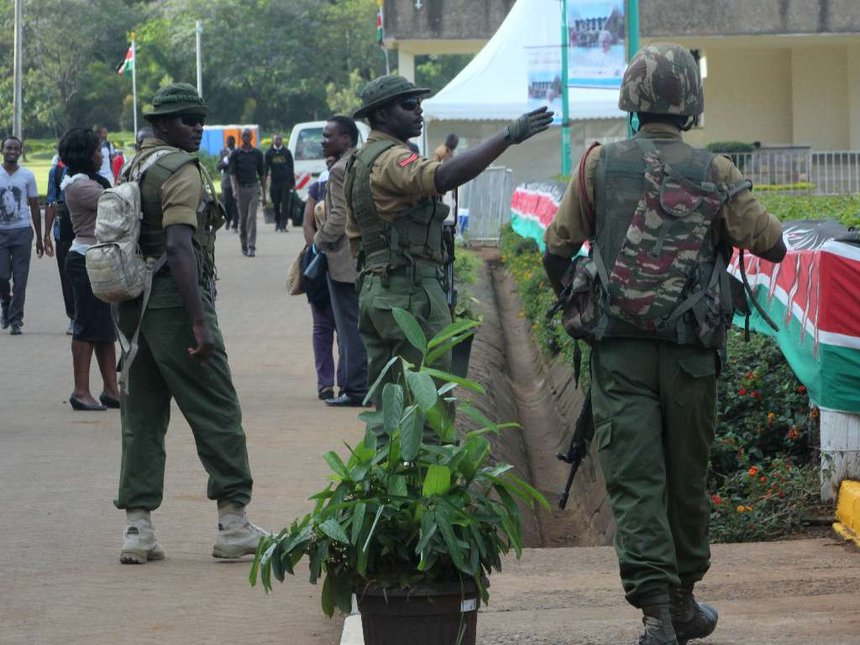 Eric Kanyingi is suspected to have been planning an attack on the Recce headquarters in Ruiru.

Yesterday, officers at the Firearms Bureau confirmed the weapons, found near a riverbed in Ruiru, belong to the GSU.

Detectives found the weapons during a police operation to track Kanyingi. Three AK-47s, 178 bullets and nine gun magazines were retrieved from his house. Kanyingi has been linked to a series of robberies in Ruiru and Githurai.

A suspected accomplice identified as Samuel Karanja was arrested onTuesday.

Kanyingi was a highly trained Recce commando in hostage and rescue operations.

He escaped a police dragnet leaving weapons behind.

The search for Kanyingi has intensified with the terror threat report.

Documents show the officer deserted his duties as an officer of the Elite Squad in 2014 while at a Recce camp in Northeastern.

Detectives from the Ruiru police station on Wednesday had raided a house said to be owned by the former officer in Githurai 45 Estate. They did not find any weapons.

“We only found literature that suggests the man was radicalised,” a senior security official in Kiambu said.

Police said Kanyingi has in the past been spotted at Riyadh Mosque.

The mosque has in the past been linked to radicalisation, fuelling suspicion Kanyingi was radicalised.

The latest operation comes after it emerged that suspected al Shabaab affiliates have penetrated security forces.

Last month, a radicalised officer opened fire on his colleagues at the Kapenguria police station killing seven people in the eight-hour attack.

Sources said the policeman applied for a transfer from West Pokot county, but it was declined.

He then opted to resign but this, too, was said to be opposed by his bosses

Multiple sources said the police constable was angry that his boss re-assigned him to other duties.

Ex-Recce officer ‘could be planning’ terror attack Reviewed by samrack on August 5, 2016 .

Share thisFacebookTwitterPinterestEmailWhatsAppRecce Squad officer patrol the UON grounds in Nairobi last year. Photo/Enos Teche. Ex-Recce officer ‘could be planning’ terror attack Police are investigating how a former Recce Unit officer and suspected al Shabaab sympathiser acquired three AK-47s belonging to the GSU. Eric Kanyingi is suspected to have been planning an attack on the Recce