Every four of 100 deaths in Kenya linked to alcohol use

Four out of every 100 people who lost their lives in Kenya in 2016 did so as a result of alcohol abuse, says a report released by the World Health Organisation on Friday. PHOTO | FILE

Every four of 100 deaths in Kenya linked to alcohol use

Four out of every 100 people who lost their lives in Kenya in 2016 did so as a result of alcohol abuse, the most recent report on the subject says.

The report released by the World Health Organisation (WHO) on Friday also shows that alcohol consumption has become alarmingly routine among minors.

Use of illicit brews commonly referred to as “changaa” or “kumi kumi” remained predictably high, at 37 per cent of all the alcohol consumed.

In Kenya, the prevalence of alcohol use disorders was at 4 per cent, that of alcohol dependence at 1.4 per cent, and that of harmful use of alcohol at 2.6 per cent of the entire population.

WHO says the overall burden of disease and injuries caused by harmful use of alcohol is unacceptably high.

And it is worried that the alcohol pandemic is preventing affected populations from achieving a number of health-related targets of the Sustainable Development Goals (SDGs), including those for maternal and child health, infectious diseases, non-communicable diseases and mental health, injuries and poisonings.

“Far too many people, their families and communities suffer the consequences of harmful use of alcohol through violence, injuries (including road accidents), mental health problems, poisoning and diseases like cancer and stroke,” says Dr Tedros Adhanom Ghebreyesus, director-general of WHO, in a press release sent to newsrooms. He adds: “It’s time to step up action to prevent this serious threat to the development of healthy societies.”

The report also considers the disease burden attributable to high-risk alcohol use. Of all deaths attributable to alcohol, 28 per cent were due to injuries, such as those from traffic crashes, self-harm and interpersonal violence; 21 per cent due to digestive disorders; 19 per cent due to cardiovascular diseases, and the remainder due to infectious illnesses, cancers and mental disorders, among others.

Around the world, according to the analysis by WHO, more than three million people died as a result of alcohol use. This means one out of any 20 deaths reported that year around the globe was as a result of an alcohol-related malady.

Of all these deaths, more than three quarters were among men. Globally, an estimated 237 million men and 46 million women suffer from alcohol-use disorders. 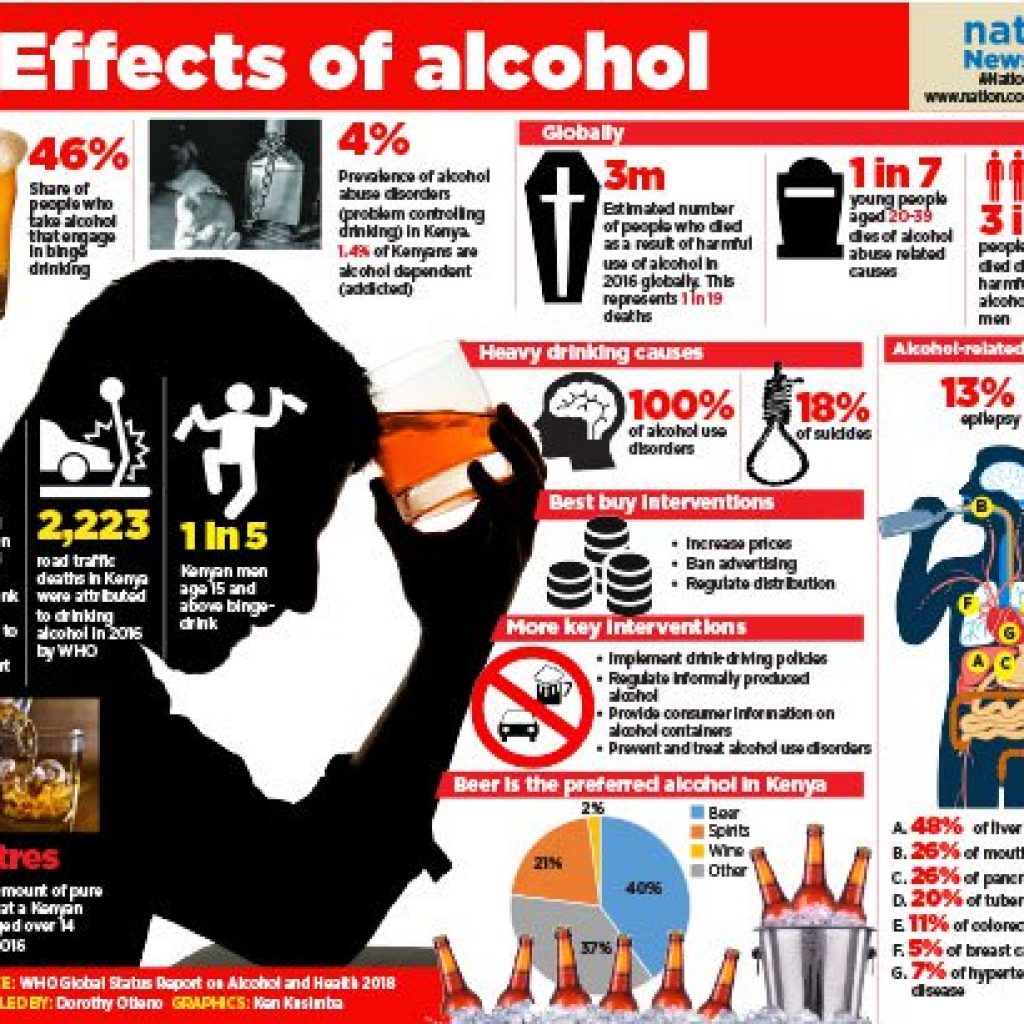 But startlingly also, worldwide, more than a quarter, or 27 per cent of all 15—19-year-olds, are current drinkers.

For Kenya, the survey found that there was prevalence of heavy episodic drinking among 14 of all 100 15-19 year olds.

The data contained in WHO’s Global Status Report on alcohol and health 2018, says research is now showing that generally the harmful use of alcohol causes more than 5 per cent of the global disease burden.

Kenyans’ average daily intake in grammes of pure alcohol was 30.4 grammes that year.

This is only a few grammes shy of the global average daily consumption of people who drink alcohol, which was 33 grammes of pure alcohol a day; roughly equivalent to two glasses (each of 150ml) of wine, a large (750ml) bottle of beer or two shots (each of 40ml) of spirits.

Of the kinds of alcohol Kenyans consumed, 39.8 per cent was made up of beer, 37 per cent by ‘others’ which predominately comprise the illicit brews often known locally as “changaa” or “kumi kumi”, 21.4 per cent spirits and 1.8 per cent by wine.

The report paints a grim picture of the toll that alcohol consumption has had on public health and the disease burden attributable to the alcohol pandemic globally.

WHO prescribes what countries   ought to do to reduce this burden. To this end, the organisation has launched an initiative dubbed SAFER, proposing strategies that governments can adopt to support them take practical steps to reduce harmful use of alcohol, accelerate progress on health, and beat non-communicable diseases (NCDs).

Some of the suggestions include taxing alcohol and restricting advertising.

Global consumption was predicted to increase in the next 10 years.

How much alcohol are people drinking around the world? School surveys indicate that, in many countries, alcohol use starts before the age of 15, with very small differences between boys and girls.

Worldwide, 45 per cent of the total recorded alcohol consumption is in the form of spirits. Beer is the second alcoholic beverage in terms of pure alcohol consumed (34 per cent), followed by wine (12 per cent).

“All countries can do much more to reduce the health and social costs of the harmful use of alcohol,” said Dr Vladimir Poznyak, coordinator of WHO’s Management of Substance Abuse Unit. “Proven, cost-effective actions include increasing taxes on alcoholic drinks, bans or restrictions on alcohol advertising, and restricting the physical availability of alcohol.”

Higher-income countries are more likely to have introduced these policies, raising issues of global health equity and underscoring the need for greater support to low- and middle-income countries like Kenya.

Almost all (95 per cent) countries have alcohol excise taxes, but fewer than half of them use other price strategies such as banning below-cost selling or volume discounts.

The majority of countries have some type of restriction on beer advertising, with total bans most common for television and radio but less common for the Internet and social media.

Tags: Every four of 100 deaths in Kenya linked to alcohol use
Previous Post