‘Enemy within’ cited in terror attacks on security agents 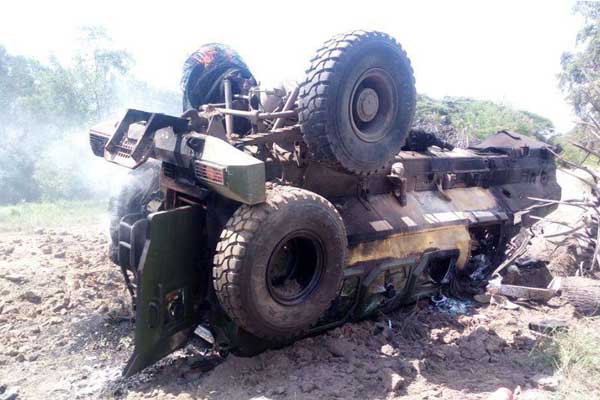 An armoured personnel carrier that ran over an explosive planted by suspected Al-Shabaab militants in Lamu County on May 31, 2017, killing seven policemen and a civilian. PHOTO | KALUME KAZUNGU | NATION MEDIA GROUP

‘Enemy within’ cited in terror attacks on security agents

The wave of attacks that have killed several security agents has raised questions about Kenya’s preparedness to fight terror.

Kenyan officials have blamed the attacks, using improvised explosive devices, on Somalia-based al-Shabaab group, but experts are warning of a local and ominous angle to the problem.

Some 32 people, including 18 policemen and soldiers, have been killed since May 16.

“This is definitely a change of tack and it is very dangerous. I don’t think this country is prepared for this because of the technological capacity required. It is meant to scare security personnel from patrolling,” he said.

Dr Simiyu added: “We know police are trained for law enforcement. These tactics are used in paramilitary and military operations during disturbance and insurgency, which is not the case in Northern Kenya. If it persists, it will affect the morale of our officers.”

He further noted that for the attackers to engage in such tactics, they must have support “from within. If so, this is very dangerous.

The government should also change strategy because the new tactics will make it very difficult for police to operate.”

“We believe al-Shabaab are being supported by some elements in Kenya. They are being guided by people with good knowledge of the area. There are Kenyans among the combatants while others are gathering intelligence for them (al-Shabaab),” he said.

The militants are said to have recruited heavily among Kenyans, with many fighters now based in the country.

Mr Saleh referred to the latest attack at Fafi trading centre, Garissa, where armed militants shot dead a teacher and burnt down a Safaricom communication mast on Wednesday night.

“When they came, though they had covered their faces, they could call out elders by name and ask about their sons (elders), whose name they also called out. If it was purely al-Shabaab foreigners, they would not operate that way,” he added.

Officers who responded to distress calls aborted their three-kilometre journey after their Land Cruiser ran over a landmine as it sped to the township.

Not even Armoured Personnel Carriers (APC) officers are being spared, as witnessed by the blowing up of an APC in Lamu on Wednesday, killing seven policemen and a civilian.

Experts now say the Chinese-made APCs can protect officers only from small arms fire, putting to question the reason these APCs were bought and deployed to the fragile north.

A security officer conversant with the operations said the APCs in use do not guarantee safety in the event of an explosion because they are not mine-resistant.

He added that survival in an ordinary APC depends on the specs (specifications) of the vehicle and the size of the improvised explosive device.

He added that an IED weighing over 10kg will certainly destroy ordinary APCs while the crew “will be lucky to escape death”.

The officer said plans are under way to deploy mine-resistant ambush protected (MRAP) vehicles for use by police in the region.

Until this is done, officers will be vulnerable to attacks that started on May 16, when four people were killed in Dadaab, Garissa County.

One explosion after another is the order of the day. The attacks have spread to Mandera county and, most recently, to Lamu county.

A total of 32 people, including 18 police officers and two Kenya Defence Forces soldiers, have been killed since the new attacks began.

Mr Saleh said al-Shabaab had changed tack and adopted guerrilla warfare because “they are no longer able to attack police stations and posts like was the case before.”

He added that there are no indications that the explosions are connected to an insurgency or “any politics” in the county.

North Eastern has a long history of security upheavals. After independence, the Jomo Kenyatta administration used the military to deal with agitation for secession of the region to Somalia.

The Moi administration also used the military to deal with instability in the region in what came to be known as the Shifta War.

Mr Saleh said: “There is nothing political about it. Many residents are also fed up. In some meetings I have attended, they are asking us to spare our police so that they (residents) can deal with al-Shabaab by themselves.”

On May 24, two police officers were killed in an explosion between Malelei and Kulan in Garissa.

Later in the day, five other officers died after their vehicle hit an explosive.

They were in a convoy escorting Mandera Governor Ali Roba to a political rally at Fino.

On the same day, four officers were killed in a similar incident at 6 am in Garissa.

The explosions on May 24 came barely 12 hours after Inspector-General of Police Joseph Boinnet issued a terror alert. He said then: “Though many terror plots have been thwarted, there have been two unfortunate incidents in Mandera county in which al-Shabaab elements sneaked in and attacked Kenyans. Security agents remain vigilant and are hunting down the terrorists who attempted to sneak into our country.”

Security officials, in a separate document seen by the Nation, are warned: “Al-Shabaab militants are likely to take advantage of the political activities and even join campaign caravans to move into the interior of the country and into townships on the border.”

On May 12, four people were killed at a quarry in Qalanqalesa, Elwak, Mandera county.

Three days later, on May 15, Mr Dekow Abey, chief of Mar Jillow in Mandera, was killed by al-Shabaab militants who raided his home.

The following day, four people died after a vehicle they were travelling in hit an explosive planted on the road at Dadaab, Garissa. And on May 17, a land surveyor died in a similar explosion in Elwak, Mandera.

The killings prompted impromptu meetings by residents, who identified families whose sons are suspected of joining al-Shabaab cells. These families were given an ultimatum to co-operate with security officials.

Mr Saleh said four suspects have been arrested since the explosions began and one of them is a “bomb expert.”

IEDs have been discovered on roads in Elwak, Kutayu, Chabibar and Fatuma in Mandera Central sub-county. Al-Shabaab militants’ movements have also been reported in Mandera East, Lafey, Hulugho, Elwak, Dif, Kolbio and Kutulo.

Most of the roads targeted are those that are frequently used by security personnel vehicles.

Ugunja MP Opiyo Wandayi, who sits on the National Assembly’s security committee, said the incidents are a reflection of failure by the Jubilee Government in security management.

He said the government was focusing more on hardware and police numbers without taking into consideration the environment they operate in.

But Kiharu MP Irungu Kang’ata countered this. “If our security teams were to disclose the number of foiled attacks, I am sure the figure would be very high. We have made good effort, looking at the number of attacks in general, which have really gone down.”

‘Enemy within’ cited in terror attacks on security agents Reviewed by samrack on June 3, 2017 .

Share thisFacebookTwitterPinterestEmailWhatsAppAn armoured personnel carrier that ran over an explosive planted by suspected Al-Shabaab militants in Lamu County on May 31, 2017, killing seven policemen and a civilian. PHOTO | KALUME KAZUNGU | NATION MEDIA GROUP  ‘Enemy within’ cited in terror attacks on security agents The wave of attacks that have killed several security agents