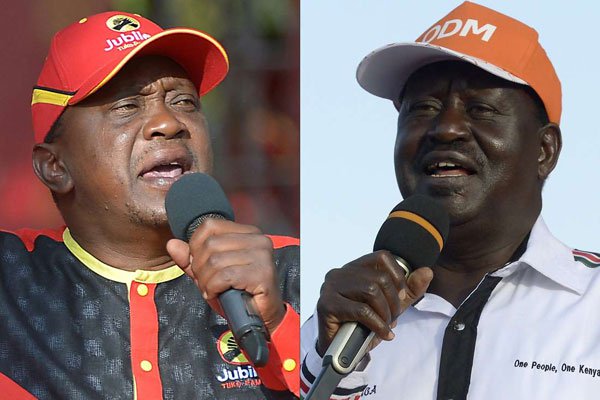 Nasa leader Raila Odinga’s withdrawal from a re-run of the presidential election is the latest in a series of dramatic developments over the disputed vote:

Kenyan voters turn out in large numbers on August 8 after a tight race between President Uhuru Kenyatta and Odinga, his long time rival.

There are fears the bad-tempered campaigning will lead to violence. More than 1,100 people were killed in politically motivated tribal violence after the 2007 election.

Early results give Kenyatta a comfortable lead but are immediately rejected by Odinga, who claims hackers broke into the electoral commission database and manipulated the results.

The official results are published on August 11 and give Kenyatta 54.27 percent of votes to Odinga’s 44.74 percent.

Angry protests erupt immediately in Odinga strongholds. The violence continues for days. The Kenya National Commission on Human Rights says 37 people are killed, most of them by the police.

Odinga takes his complaints to the Supreme Court. In a shock announcement, its judges on September 1 declare the results of the poll “invalid, null and void” and orders a re-run within 60 days.

The annulment is a first for Africa.

The date for the new election is later announced as October 17.

A confidential memo in which the Independent Electoral and Boundaries Commission (IEBC) admits to irregularities and failings in the conduct of the vote is made public on September 7.

As doubts grow over Kenya’s ability to hold a rerun of its presidential election, the French biometrics firm OT-Morpho that provides the electronic voting system says on September 18 it will not be ready in time.

The Supreme Court issues days later a detailed judgement lambasting the IEBC for failing to properly conduct the election.

The commission announces that it has to push the re-run back to October 26 in order to prepare.

Kenya’s chief prosecutor on September 23 orders an investigation into the commission over the conduct of the vote.

The opposition slams the move as an effort to render legal some of the  “irregularities and illegalities” cited in the Supreme Court’s cancelling of the vote.

Protests erupt in early October as Odinga calls on his supporters to pressure the government to overhaul the election commission, threatening he will not take part in a re-run otherwise.

On October 10 he withdraws from the re-run, saying the election panel has failed to make needed reforms.

But he also indicates this does not mean his battle is over, citing legal arguments his party believes will compel election officials to begin the whole process from scratch.

Share thisFacebookTwitterPinterestEmailWhatsAppPresident Uhuru Kenyatta (left) and Opposition leader Raila Odinga. Kenyans were sent to go to the polls on October 26, 2017 to vote in repeat presidential poll. PHOTO | AFP  Election 2017: Twists and turns aplenty Nasa leader Raila Odinga’s withdrawal from a re-run of the presidential election is the latest in a series