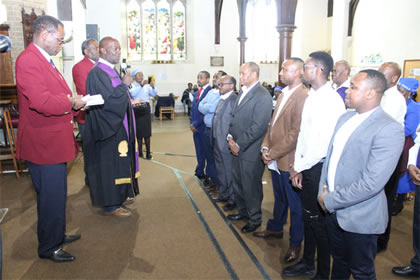 Rev. A Kanga, the PCEA Deputy Secretary General currently in UK officiated several ceremonies in London on Sunday 25th February, 2018. The ceremonies that took place at PCEA UK Outreach St. Mathews Church in Stratford, London. He started the occasion by admitting 27 women into Women’s Guild, seven men were admitted into Men’s Fellowship, four men were dressed with PCEA Men’s Fellowship bracers, five children were baptized and Rev. Kanga concluded with Holy Communion. Reading the Bible from 2nd Samuel 9: 1-13 the Deputy Secretary General advised  the worshippers not to miss the mark which  is Jesus Christ. He said David showed kindness to Saul’s family although King Saul  tried to kill  him 24 times. King David sent for Mephibosheth. Now when Mephibosheth, the son of Jonathan, the son of Saul, was come unto David, he fell on his face, and did reverence. And David said, Mephibosheth. And he answered, Behold thy servant! And David said unto him, Fear not: for I will surely shew thee kindness for Jonathan thy father’s sake, and will restore thee all the land of Saul thy father; and thou shalt eat bread at my table continually. More later.

among them Wambui Kuguru a grand child of the late Kenyan minister Davidson Kuguru.