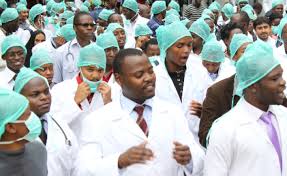 A watchman shocked Bungoma residents when he helped a woman to give birth after doctors went on strike on Monday.

Benson Wanyonyi was manning the entrance to Bungoma County Referral Hospital when the women got into labour and called for help.

Rosebela Marani, 32, did not know that doctors had downed their tools, in what they said would be the “longest strike” in Kenya’s history.

“I am glad the guard helped me,” she said after giving birth to a boy, with the help of a guard with no medical training of any kind. The baby is in good health.

“I was at the main entrance when the woman was brought in on a motorcycle,” said Wanyonyi.

“She then learnt that the workers were on strike and was contemplating rushing to a nearby private facility but she was overwhelmed. I ran to the outpatient department and got some gloves and assisted her.”

Patients were discharged from the hospital as the strike began. Most of the facilities in the county remained closed with patients at Webuye subcounty hospital opting to see private medics.

A man and woman died at Naivasha subcounty hospital, whose health workers only admitted patients in critical condition when the strike became official.

Residents transferred their sick relatives to private hospitals in Naivasha and Kinangop, but said they hoped the strike would end.

But Joseph Mburu, the superintendent in charge of the hospital said the two had been sick for a long time.

“Two people died over the weekend and this had nothing to do with the ongoing strike by the nurses,” he further noted.

Mburu said more than 150 nurses and doctors had downed tools.

“We are relying on skeleton staff as we wait for the crisis to be resolved,” he said, adding the outpatient department was operational but that the number of patients had declined.

More than 700 nurses from Nakuru county have been on strike since last week, demanding promotions and accusing Governor Kinuthia Mbugua of failing to fulfill his promises.

The county has advertised 1,200 positions to replace those on strike but a nurse, who did not want to be named, said they will not be intimidated.

The nurse said it was illegal to advertise their jobs and that the county should turn its focus to addressing their grievances.

“The move by the county government to hire new healthcare workers on contract is baseless and meant to intimidate us,” she said.

The nurse asked members of the public to brace for tough times, saying medics had suffered in silence for years while the county embezzled funds.

“The strike has just begun… We are ready to stay at home for months… until all the grievances we have raised are fully addressed,” she said.

Share thisFacebookTwitterPinterestEmailWhatsAppDoctors strike: Bungoma watchman delivers baby, two dead in Naivasha A watchman shocked Bungoma residents when he helped a woman to give birth after doctors went on strike on Monday. Benson Wanyonyi was manning the entrance to Bungoma County Referral Hospital when the women got into labour and called for help. Rosebela Marani, 32,