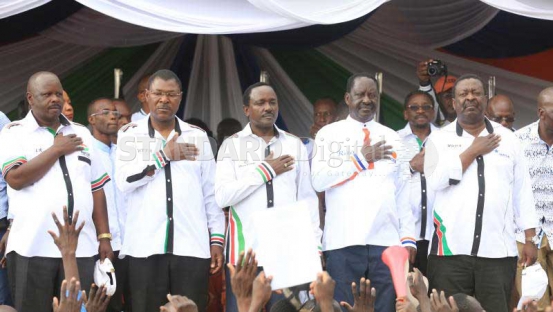 Kenyans in diaspora together with the National Super Alliance (NASA) national campaign secretariat has established a leadership team that will campaign for Raila Odinga. The team of 12 individuals will mobilize NASA supporters in Africa, Asia, Australia, Europe, Canada, Gulf and USA. The team is chaired by George Fred Osewe, co-chaired by Victoria Bett. Fred Osewe said the secretary in charge of strategy and media relations is Joseph Lister Nyaringo, while Robert Ndede and Samuel Okemwa will oversee the NASA campaigns and publicity in the blogosphere, print and television. For intelligence gathering and campaign operations, the team shall be led by Dan Ochweri and Albert Musasia. “Many NASA supporters will be travelling home to be part of the team that will monitor vote tallying at the polling stations under the ‘adopt a polling station’ initiative to prevent rigging and other campaign matters,” Mr Osewe said. ALSO READ: Mututho blasts Raila over manifesto Nyaringo noted that a NASA diaspora office has already been set up in Nairobi. “It comprises a pool of talented diaspora professionals currently coordinating locals and the diaspora in laying out strategies for Raila’s victory. The office is led by Bella Akinyi, deputized by Job Ocharo,” Nyaringo said. Osewe said the team will focus on three key pillars during campaign: resource mobilization for the adopt a polling station initiative, formulating campaign strategies, promoting Raila’s agenda in the blogosphere, print, television and at the grassroots. In the Gulf, NASA diaspora shall be led by Martin Ongadi, Eric Ashikoye and Evans Moseti. “In the vast European regions, we shall have five coordinators- Elly Omondi, Mohammad Abbas, Ali Abdo, George Odegi and Dorah Atinda. In Southern Africa, Kennedy Omweri and Charles Mayaka will coordinate the region for NASA,” Nyaringo said. The 12-member team has divided the US into four zones. Each zone shall have not more than five coordinators who will liaise with NASA supporters on the ground for resource mobilization. He also pointed out that the US pacific region covering Washington State shall be led by Prof Frank Onchiri, Omondi Owera and Samuel Nyakemwa. The North East shall be coordinated by Sally Olembo, Geoffrey Nyamue, Steven Mwangi, Esli  Aburi and Dr Dan Mugubi. ALSO READ: Mututho blasts Raila over manifesto “In the Southern region, covering Texas and the surrounding States, it shall be coordinated by Jack ambuka, Frank Ogwoka, Ezra Onsarigo and Frank Ogwoka,” Osewe said. The US Midwest covering Minnesota and surrounding States, which has a huge Kenyan population will be coordinated by Haron Ondigi, Mike Owour, Joseph Mose and Andrew Kerosi. The South Central shall be coordinated by Evans Momanyi, Dickson Muoki and Felix Nyangate. The Mountain region covering California will fall under Alex Ngotho Kinyanjui, Karani Bwonsomu and Vera Ambeva. “We can’t afford another shambolic election manipulated by the government of President Uhuru Kenyatta. Every step of the election process must be open and free of the mysteries we have witnessed before,” said Mike Owuor. A coordinator from Minnesota, Mr Kerosi, observed: “Even though some diaspora members may not vote in August, our unity of purpose in supporting the adopt a polling station will ensure free, fair and credible election.” “Despite being away from home, I will use my resources to support NASA and ensure that the current government is defeated in August. Kenya needs a fresh start after many decades of misrule,” said Dr Dan Mugubi, who is also a coordinator in the US, East Coast. Meanwhile, Nyaringo said the diaspora in partnership with NASA national campaign secretariat has established two platforms that Kenyans at home and abroad will use to channel donations towards the adopt a polling station initiative. ALSO READ: NASA’s big plans for Kenya after poll “An online portal for diaspora: https://www.gofundme.com/3ix8sz4 and a Pay bill number 855425 have been established. There is also another pay bill 991444 established by the NASA campaign Secretariat where Kenyans from any region can channel their donations to support the same initiative. The two platforms will run parallel to one another,” Nyaringo said. “Kenyans who believe in change irrespective of their status in life should commit themselves to prevent rigging which is a cancer to our democracy. Pooling resources and physically having agents in every polling station will scale down rigging,” said Victoria Bett in Washington DC. NASA coordinator in the UK Ali Abdi expressed his concern on how rigging has kept robbing Africa off best leaders. “The epic August election should set Kenya free and diaspora is ready to play a critical role. The diaspora understands that Kenya has suffered massively as a result of election rigging,” Abdi said. “The diaspora’s contribution to the country’s exchequer cannot be underrated. Our annual remittances to Kenya are in a tune of billions.” We want a leader of Raila’s caliber to spur the country’s economy through domestic and foreign investments,” said Nyaringo.
Read more at: https://www.standardmedia.co.ke/