DEATHS THAT SHOOK THE NATION IN 2016 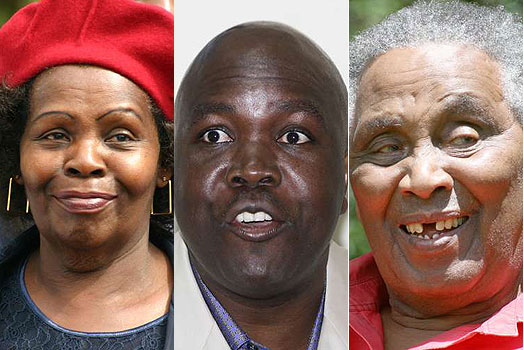 DEATHS THAT SHOOK THE NATION IN 2016

Lucy Kibaki
She was the first occupier of the First Lady office to actively engage with the public during her reign. She died in England in April aged 80.

The former teacher, who brought colour and drama to the office of the First Lady, is remembered for staging nightlong sit-ins in newsrooms and publicly dressing down high-ranking government officials including a vice president and a minister.

Tom Cholmondeley
One of the most controversial remnants of the British Aristocracy in Kenya died in August of cardiac arrest at the age of 48. The trigger happy son of the fifth Lord Delamere, was twice charged for shooting to death two men on his farm, a slice of the Sh5billion estate he left behind in Naivasha.

Achieng Abura
The Afro-Jazz, Afro-Fusion singer who distinguished herself as a great composer, singer and trainer, died on October 20th stirring national debate after claims emerged that she was abandoned by friends in her hour of need.

Her death brought to the fore questions regarding the meaning of friendship in the internet age. Her age remained a guarded secret.

Isaiah Kiplagat
For two and a half decades, Kiplagat was the face of Athletics Kenya, steering the association with steely resolve and to mixed results. He passed on at 72 while under investigation for abuse of office and authority.

James Siang’a
A star goalkeeper of the 1970’s and an excellent coach from the 1990’s all through to the first decade of the 2000’s, he died on September 9 aged 67. He remains the longest serving Harambee Stars goalkeeper, having guarded the posts for a record 15 years.

As a coach, he led the Kenyan and Tanzanian national football teams at different periods in his coaching career and also coached Uganda’s Express FC, Tanzania’s Simba SC and Kenya’s Gor Mahia.

Waweru Mburu
Radio Citizen veteran broadcaster had one of those voices that stopped you on your tracks. His socio-economic and political radio show ‘Yaliyotendeka‘ was precise, raw and unflinchingly direct in its approach.

The show earned him nationwide following and admiration. In a country used to sex talk to keep radio audiences captivated, he was one of the few radio commentators who stuck to dissecting real issues in Kenya. He passed on in September 28 after a courageous battle with gastric cancer.

William Ole Ntimama
A fierce defender of the Maasai community, he guided the political life of his people through the presidencies of Jomo Kenyatta, Daniel Moi, Mwai Kibaki and in part Uhuru Kenyatta.

In 1992, he told other communities settled within the Maasai community to ‘lie low like an envelope’.

He was controversial, and a fighter. The Maasai people listened to him religiously, a fact that gave him political clout and presidents knew that he was a man to ignore to your detriment.

The former Heritage Minister transitioned peacefully at his home in Olchoro, Narok County aged 86 on September 1.

He was known for berating the government, calling out the DP William Ruto and locking horns with other government officials over misuse of public funds. He died on May 5 aged 46.

John Keen
He was one of the politicians who participated in the pre-independence Lancaster House Conference talks in London in 1962.

He is remembered for being passionate, generous and forthright, the last trait landed him in jail for criticizing both the pre-independence government and the newly installed Kenyatta government.

A former Taifa Leo reporter, he was the first man to see the impending problems in creating a unified East African Community, arguing that the presidents were the main stumbling blocks.

The veteran politician served as KANU’s organizing secretary in the early 1960’s, MP for Kajiado North for 10 years from 1969 and also as an assistant minister during the Moi era. He died on Christmas Day, aged 86.

Source: Nairobi News
DEATHS THAT SHOOK THE NATION IN 2016 Reviewed by samrack on December 31, 2016 .

Share thisFacebookTwitterPinterestEmailWhatsAppFROM LEFT: Former First Lady Lucy Kibaki, slain businessman JacobJuma and formercabinet minister William ole Ntimama. PHOTOS | FILE DEATHS THAT SHOOK THE NATION IN 2016 By PETER ODUOR Kenya lost some of its bright lights in 2016, and some of its not-so- bright lights. Lucy Kibaki She was the first occupier of the