David Ndii hits out at Raila after meeting Uhuru’s sister, terms it a ‘let down’ 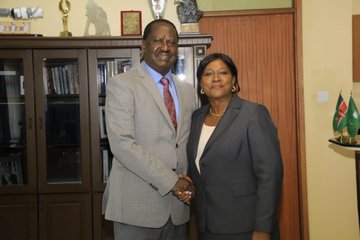 David Ndii hits out at Raila after meeting Uhuru’s sister, terms it a ‘let down’

Economist David Ndii said on Wednesday took a jibe at opposition leader Raila Odinga, saying he was a let down.

In a tweet, Ndii, the former opposition chief strategist, said, “We have truly lost this one. What a let down.”

He was responding to a tweet by Raila who posted a photo of himself with President Uhuru Kenyatta’s sister Kristina Pratt after they met at his Capitol Hill office in Nairobi.

Raila tweeted: “I was pleased to receive Madam Kristina Pratt Kenyatta at my office this morning.”

In the photo, Raila is seen handing Pratt a copy of his book – The flame of freedom.

Raila fell out with a number of opposition hardliners after he softened his stance on Uhuru through the Handshake.

The hardliners have failed to recognise Uhuru as the country’s president after the 2017 polls.

Since then, Raila has been receiving diplomats, state officials, politicians and diplomats at his Capitol Hill office.

David Ndii hits out at Raila after meeting Uhuru’s sister, terms it a ‘let down’ Reviewed by samrack on August 14, 2019 .