President Uhuru was expected to finalize on a $3.68 billion loan for Phase II of the Standard Gauge Railway (SGR) but some argue that China refused to extend the funding due to “disagreements over the collateral Kenya offered, as well as doubts over the railway’s future prospects.” The government later declined these allegations and clarified that the SGR was not a top priority in their engagement with China.

Kenya is one of the few African countries that are part of China’s trillion dollar BRI project that is in form of loans and investment for projects across 65+ countries in South East Asia, Middle East, Europe, Africa, and South America. The SGR has been used severally by President Xi as the poster child for China’s BRI strategy in Africa. Why is it no longer a priority agenda?

This is not only true for Kenya but also several other BRI states including Malaysia, which heavily criticized and suspended over $20 billion China-backed projects, but just this month, signed a $1 billion deal to create an AI hub with the help of Chinese AI unicorn SenseTime. Founded in 2014, SenseTime is the most valuable AI startup in the world at a $4.5 billion valuation. Its main application is its face recognition algorithm and has been used for surveillance by the local government.

“Apart from being a customer, China’s government has been pivotal in helping SenseTime […] by providing it access to data. SenseTime claims to have a training database of over 2 billion images — many publicly available training databases top out at 10 million images.” — writes Josh Horwitz in a Quartz Article.

This reflects a new BRI strategy that is focused less on mega-infrastructure financing and construction, which has been largely criticized as a form of debt-trap diplomacy. On the other hand, high-tech investment doesn’t involve large sums or major loans and aligns with the government’s interest in becoming an AI world leader by 2030.

Launched in 2017, China’s AI 2030 is a New Generation AI Development Planthat intends to mastery and make China a world reference in AI. Data is a vital component of AI and the winner of the AI race will need access to an enormous amount of information about real-life human behavior.

Data is, therefore, the most important resource in the world and the new BRI strategy is an integral component for China to become an AI world leader

This $1.75 billion Konza Data Center and Smart cities come a time when the Kenyan government is pushing for its citizenry to register for a Huduma Number that consolidates Kenyans’ information including biometric data. In one of the meetings at the second BRI forum, President Uhuru shared the Huduma Number initiative to Chinese investors:

“We have also established a one-stop center to facilitate ease of doing business and automated service delivery through innovative platforms such as Huduma Namba, e-Citizen, e-Regulations, iTax, Single Window Electronic Clearing System and the Land Registry.”

The Courts have, however, ruled the Huduma Number registration a voluntary exercise yet Kenyans have continuously received threats including potential denial of government services for anyone who does not register by May 18th, the mass registration deadline. The government had also threatened to switch off sim cards of Kenyans without Huduma Number by the deadline but later retracted this after receiving severe backlash from the citizens. The Government spokesperson recently shared that there will be consequences for Kenyans who will not register for the Huduma Number by the deadline.

In a day where data is the new king, what could possibly go wrong with the Huduma Number?

The Huduma Number is a step in the right direction for a digital economy but it is being enforced when Kenya does not have a data protection law.

“That means that this massive data collection exercise — including facial recognition, fingerprints, and other key citizen data — will be in place in the absence of any real legal oversight,” writes Nanjala Nyabola on the Huduma Number initiative.

Similar to Kenya, China’s telco giant, ZTE, is helping Venezuela with their “fatherland card”, which is a new, smart card ID that contains its citizenry personal data. The fatherland card is linked by the government to subsidized foods, health and other social programs most Venezuelans rely on to survive. Additionally, the card records who voted and the database registers if, but not how, a person voted during the 2018 disputed election.

“It’s a blackmail. […] Venezuelans with the cards now have more rights than those without.” shares Hector Navamo, a Socialist Party founder and former government minister.

Should Kenyans be worried about their data? YES

Yuval Noah Harari cautions on a new kind of colonialism — data colonialism — where raw information is mined in numerous countries, processed mainly in the imperial hub, and then used to exercise control throughout the world. Yuval advocates for the world’s weaker states (especially African countries) to avoid being data-colonized by not ignoring the ongoing AI race but instead trying to either fight or join it as a united front as opposed to doing it individually.

In my previous article on the BRI, I called for the establishment of an Africa-China Taskforce, which would provide a comprehensive approach on how Africa can strategically deal with China, to ensure a win-win relationship. With the changing BRI strategy that is focused on emerging technologies, Africa needs a regional data protection policy in place to protect its citizens both in the continent and abroad. Additionally, it should enforce for sharing in the profits of data collection. 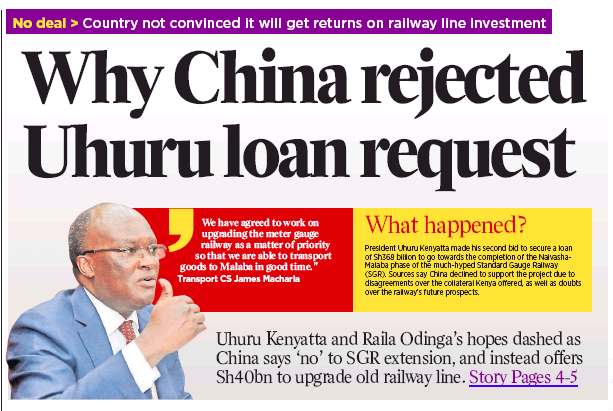 As the rest of the world’s population shrinks, Africa is expected to have the world’s youngest population in 2050 making up nearly twice the young population of South Asia and Southeast Asia, East Asia, and Oceania. Investing in this population is key to ensure that the region avoids being data-colonized.

The Rwandan government has taken a lead in launching “Born to Code”, the first coding academy that focuses on cybersecurity and software programming. More African countries should follow Rwanda’s lead and invest in different emerging technology skills including big data, AI, 3D printing, etc. Additionally, entrepreneurs are building businesses around upskilling African talent with these skills including Andela, a coding accelerator company that recently raised $100 million in its Series D round. There is a need for more investment in this space to ensure that Africa has the right skills in the emerging tech industry.

Africa is prepared for the Fourth Industrial Revolution (4IR). The continent has enough problems and young people across Africa are using innovative business models and technologies to challenge the traditional approaches of going about ‘age-old problems’ in sectors such as agriculture, financial sectors, healthcare, education, water, and energy. More investment in these startups is vital to ensure that Africa is not just a consumer but a producer of the 4IR.

Data is the new oil and Africa can avoid another scramble!

Africa has missed out on several revolutions but it is in a position to determine its fate for the ongoing Fourth Industrial Revolution. It cannot afford another scramble and partition of Africa 2.0.

“It is far from certain that the world’s weaker states can avoid being data-colonized. But they have to try. If they bury their heads in the ground, focus on their immediate problems, and ignore the AI race, their fate will be decided in their absence.” — Yuval Noah Harari

Author: Harriet Kariuki, is a Yenching Academy Scholar at Peking University, China and holds a BA in Government from Harvard University. She is a co-founder to The Afrijob Network, a platform that matches high quality talent to fast-growing African companies.