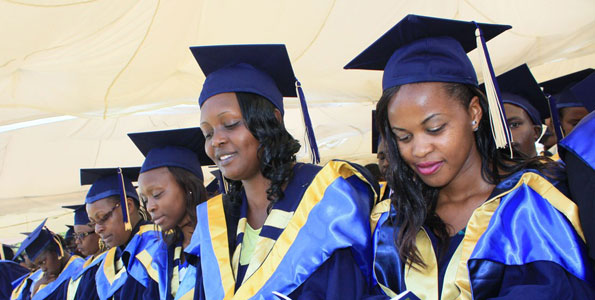 A past graduation ceremony at KCA University in Nairobi. PHOTO | FILE

Meanwhile, in South Africa, Nelson Mandela described education as “the most powerful weapon which you can use to change the world,” and former president of Harvard University Derek Bok famously retorted that “if you think education is expensive, try ignorance”.

He also told us that “ever since economists revealed how much universities contribute to economic growth, politicians have paid close attention to higher education.”

On retiring from public life, he lived his last years in the Negev Desert in the south of Israel, and inspired by his vision of seeing this desert bloom a university was established in nearby Beersheba, which following his death in 1973 was renamed after him.

On my recent visit to Israel, I was privileged to visit Ben Gurion University, composed of a cluster of modern concrete structures, robust yet very attractive.

Among them, I saw the emerging Advanced Technology Park which already houses the Deutche Telekom and T-Mobile research lab, and where IBM is also due to move in, among other hi-tech and biotech firms.

The university is among the Top 100 in the award of US patents, and prides itself on attracting the brightest and the best, acting as a “point of pilgrimage” for researchers and students from all over the world.

Dr. Stavi Baram, the director of International Academic Affairs who was our guide, explained that what distinguishes Israeli universities is Israel’s way of getting things done, “not waiting till everything is in line.”

“Getting things done” is what one finds everywhere in Israel, and with everyone. Not least with Dr. Yossie Shevel, the President of the Galilee International Management Institute that hosted the group of over 30 senior academics from all over Africa (plus me, as Chairman of the Council of KCA University) for our two-week programme on managing institutions of higher education.

Not once, but several times when our group asked him how African universities and countries in general could do more to emulate the extraordinary achievements of Israel, he encouraged us with his three favourite words: “It is possible”.

If Israel has managed, he reckoned, why not us? “What happened here is not a miracle,” he insisted, adding the Jewish belief that we humans have choices, and that we are the ones who decide what to do and how to lead our lives.

It was Albert Einstein who triggered the explosion of scientific activity in Israel. He was a forefather of two of Israel’s most prominent institutions of higher education, the Hebrew University and the Technion, and one of the speakers who addressed us, Eleizer Zanberg (a former minister who once chaired the hi-tech committee of parliament), emphasised that “nothing is possible without education —and certainly not R&D.”

Among Israeli inventions he listed in the agricultural field were drip irrigation and ways of keeping produce fresh, cherry tomatoes and water melons without seeds.

On the technology front we owe the memory stick, VOIP (Voice over Internet Protocol), major developments in 3D printing, and Intel’s mobile processor for laptops and other mobile devices to Israeli inventors. No wonder both Intel and IBM established their first R&D centres outside of the US in Haifa.

We also visited the Weizmann Institute in Tel Aviv, whose delightful ethos is “to be driven by curiosity”, by “the passionate desire to understand why things happen”.

Its people believe that, as Israel’s founding President Chaim Weizmann (himself a scientist and after whom the institution was named) expressed it, “I trust and feel sure in my heart that science will bring to this land both peace and a renewal of its youth, creating here the springs of a new spiritual and material life. I speak of both science for its own sake and science as a means to an end.”

The Weizmann Institute doesn’t deal with the mundane, working in such areas as genetic engineering and nano-materials. It used to research into better ways of exploiting solar power, but the issues there having been pretty much resolved they switched to medical research.

Overall, what the scientists at the institute are after, we were told, is reducing world hunger and increasing life expectancy. Not bad at all.

“In Israel we never give up,” one of those who addressed us asserted. “If we fail we just go back and try again.” And so they do. Wherever we went we were addressed by fascinating speakers, so evolved, so wise, so philosophical, so frank, so eloquent. But the child within them was never far away, and without exception they enjoyed a sense of fun, a joke, at any opportunity.

They were proud and confident, yes, assertive certainly. But humble too, and respectful of us.

In what frame of mind did I return to Kenya? Inspired, certainly. Feeling that we actually can emulate can-do countries such as Israel, including in our academic institutions?

Possibly — even in the sciences that we have hitherto so ignored. We have so many bright, energetic people that I would not exclude the possibility.

What worries me is not the availability of individual talent, whether for the research itself or of the commercialisation of what may emerge from it. Rather it is the constraining managerial and financial environment within which our talent must operate.

Kenya has been catching in technology. But we must also get serious about science, engineering and mathematics.

And for this, we must identify them as a national priority. There’s no better place to see how and why than Israel, where these disciplines have been mightily enabled and as a result of which the country is unambiguously First World.

This is not my first column resulting from my time in Israel. And it will not be my last.

Crucial lessons for success from Israeli universities Reviewed by samrack on April 26, 2016 .

A past graduation ceremony at KCA University in Nairobi. PHOTO | FILE By MIKE ELDON, mike.eldon@depotkenya.org When Tony Blair was Prime Minister, he identified his top priorities as “Education, Education, Education”. Meanwhile, in South Africa, Nelson Mandela described education as “the most powerful weapon which you can use to change the world,” and former president of