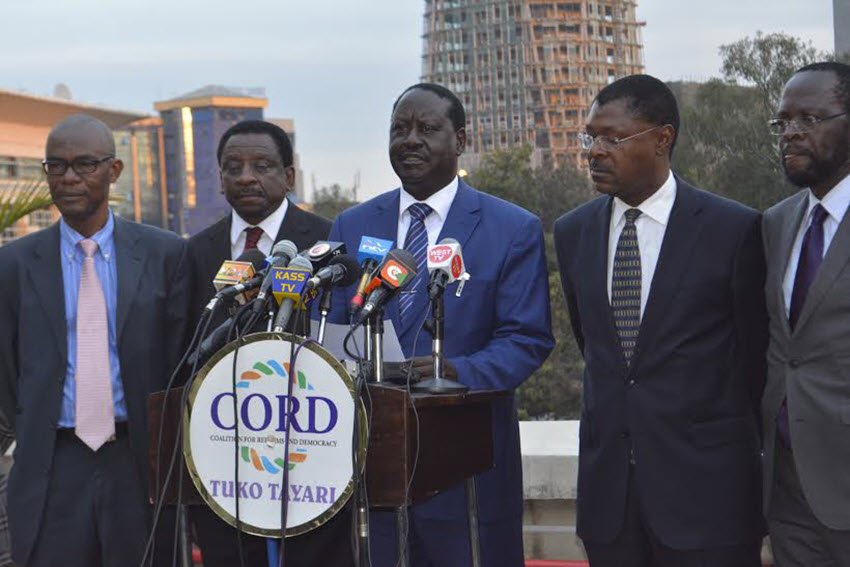 The Coalition for Reforms and Democracy (CORD) now says they have agreed with the Jubilee coalition to form a four-member team to deliberate on the issues around the independent Electoral and Boundaries Commission (IEBC).

CORD leader Raila Odinga said that each party will pick two members and report back by Friday.

Speaking at Capitol Hill, Odinga announced that Siaya Senator James Orengo and Tongaren Member of Parliament Eseli Simiyu will represent the opposition in the talks with the Jubilee team led by Meru Senator Kiraitu Murungi

Odinga said that the coalition has been consulting with the Jubilee government and other stakeholders who he said “are keen to see the country arrive at an acceptable way of reforming the IEBC and our electoral infrastructure” to iron out issues that the coalition says are critical to creating a credible electoral body.

While using the phrase “a white smoke has appeared”, Odinga acknowledged the move as an indication by the government to start dialogue further noting that they will not delve into the outstanding issues during these talks.

“We are now talking to each other and not at each other,” said Odinga

However, Jubilee’s Kiraitu Murungi – while speaking to Citizen TV on phone from Meru – said that he was not aware of such an agreement with CORD requiring the two coalitions to forward two members each to negotiate the way forward on the matter.

“My appointment was by the President and it was to a very specific mandate; to lead a team of 11 Jubilees Members of Parliament. I’m not aware of further instructions appointing me to any other team or brief. I expect that were such an appointment to be made or instructions given, they will come from the President himself and nobody else,” said Kiraitu.

He said that he is “currently in Meru and I have no plans to come back until Monday.”

This comes just a day after President Uhuru Kenyatta announced the formation of a joint Parliamentary Select Committee to dialogue with the opposition CORD over the IEBC stalemate, something CORD referred to as a move favouring Jubilee.

Odinga added that while the President’s gesture is welcome, it does not cater for opposition’s demand for an out-of-Parliament dialogue process.

Last week, the opposition coalition had named five legislators to represent it in dialogue over contentious issues including reformation of the Independent Electoral and Boundaries Commission (IEBC).

CORD, Jubilee ‘agree’ on four-member team to dialogue on IEBC stalemate Reviewed by samrack on June 9, 2016 .

CORD, Jubilee ‘agree’ on four-member team to dialogue on IEBC stalemate The Coalition for Reforms and Democracy (CORD) now says they have agreed with the Jubilee coalition to form a four-member team to deliberate on the issues around the independent Electoral and Boundaries Commission (IEBC). CORD leader Raila Odinga said that each party will pick