Community appeal:Julia, her Journey of beating the odds 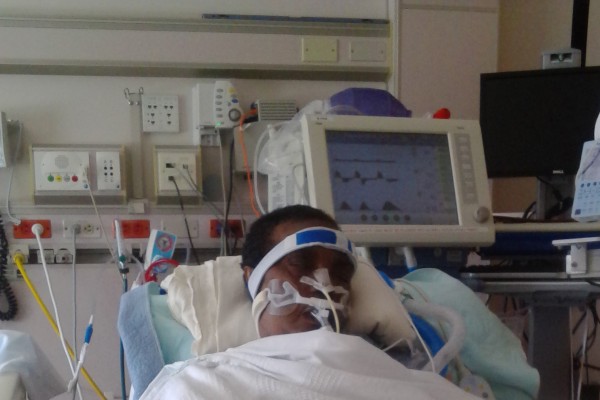 Community appeal:Julia, her Journey of beating the odds

Julia, her Journey of beating the odds
She’s been fairly active for a 67 year-old. She is very social and if she does not call you it is because she does not have your number. She loves going to Church and thereafter the social hour meeting other people her age group.
Her journey started on Sunday, June 7 2015,about two weeks prior she had been hospitalized for 6 days for high blood sugar and high BP and was on blood thinners.She had been home 3 days when she developed severe abdominal pains and low BP. She was  then taken to Cambridge Hospital and admitted to ICU because of internal bleeding.
A procedure was done to stop the bleeding. The night was a struggle for her with falling BP and lots of pain.By morning her condition had worsened and her daughter called the chaplain to come and give her “Last rites”.
After anointing she was transferred to Beth Israel Hospital to surgical trauma ICU for surgery or she would surely die without it.
They did exploratory surgery and discovered massive bleeding in the abdomen, 2 liters of blood taken out.
After surgery she later developed complications and had multiple organs failure. She had vomited and aspirated during intubation causing her lungs to collapse unable to oxygenate the blood adequately.
The kidneys had also failed.  She was started on continuously dialysis,was ventilated and was on ECMO (a machine that allows blood to bypass heart and lungs allowing them to rest and get better”.
That night the expectation for her to survive till morning was very slim (10%). In the family room those that had gathered prayed, and cried, “If it was her time it was her time, if it was not her time God will provide a way even when there seems no way”.
It has been a long road since then. She stayed one month in ICU heavily sedated and underwent five surgeries which involved removing body organs every time.
It was an emotional roller coaster not knowing what to expect from the Hospital calls.Her vital signs remained unstable for a long time and she took longer than expected to wake up from sedation.By grace of God she finally woke up and was able to breathe on her own and transferred to surgical ward.
She then started developing spiking fevers with no known cause.She underwent many tests, all possible sources of infection checked and removed if suspected.
Dialysis lines also removed and she never needed dialysis again.She was treated for probable cause and the fevers mysteriously disappeared.The next challenge was to eat by mouth.Her mouth was filled with sores.She experienced a lot of nausea and vomiting every time she tried eating by mouth.With nausea medication she started making some little progress and the doctors were amazed.
In early September,we were informed that it was time for her to go to rehab and would be discharged within a few days.
She was totally dependent and bed ridden.Her insurance Mass Health Limited, does not cover rehabilitation nor transportation services and we were to get ready to bring her home in 2 weeks.
It has been quite a journey,our families, friends and their friends have walked with us through prayers,encouragement,support and visits that we are now talking of discharge.She still has a long road ahead in her recovery.
However her discharge is pending and coming soon or later.The challenge is to find a bridge from acute hospital to home where she can access physical therapy for about 2 months which has been overwhelming.

They range from nursing home with physical therapy for 45 minutes a day to a rehab hospital with about 3 hours every day.
The family of Julia Gacao and organizing committee seek your support for a

Donations can also be made to:

Share thisFacebookTwitterPinterestEmailWhatsAppJulia Gacao at hospital with nosogastric tube for feeding By Sam Mwaura/Samrack Media Community appeal:Julia, her Journey of beating the odds Julia, her Journey of beating the odds She’s been fairly active for a 67 year-old. She is very social and if she does not call you it is because she does not have