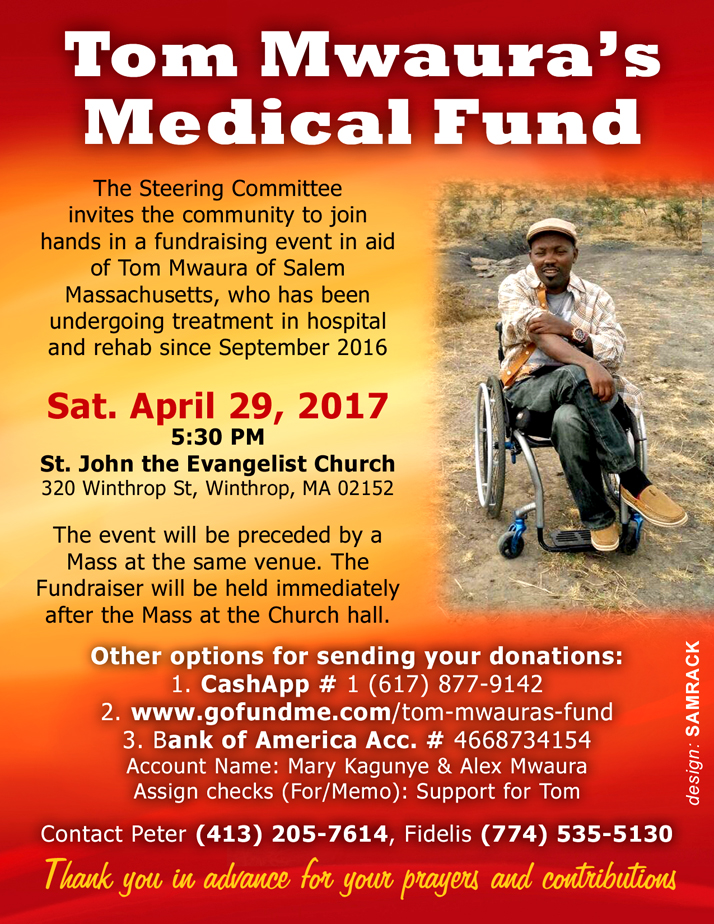 Community Appeal:Financial Help Appeal for an ailing Kenyan in Boston

About 18 years ago, Tom Mwaura was involved in a car accident that left him paralyzed from the waist down. Over the years, through God’s mighty hand, He has enjoyed years of relatively good health. After blazing and taxing 12 months of physical and occupational therapy, Tom resumed college and he graduated in Bachelor of Accounting in May, 2002. Since then, he has worked with different companies. Before his hospitalization, he was working as a Senior Tax Accountant for Jackson Hewitt Services as well as attending college pursuing further studies.

Tom has been undergoing treatment in Hospital/Rehab since September, 2016. Here’s an outline of his illness timeline:

Tom fell ill towards the end of August, 2016 while visiting with his family in Kenya. The doctors in Kenya couldn’t find the genesis of his failing health. Two weeks later, he returned to Boston and his primary physician did all the tests possible to find out what the root of the problem was. Just like the Kenyan counterparts, no conclusive explanation was reached for Tom’s rapid weight loss. Three weeks in, the situation worsened when he started getting lethargic and struggling mightily to accomplish basic tasks like bathing and dressing. This is when he realized that something was amiss and decided to check into Salem hospital. After rigorous tests, the doctors found out that he had an ingrown infection on his back. They immediately took him for surgery and removed all the infected areas. Unfortunately, the infection had spread to the bone and that left them with no choice but to put him on powerful IV drugs for about 8 weeks. The regimen worked to perfection and all that remained was a final surgery to close the wound. The surgery was finally done on Feb 15, 2017 and was highly successful. However, post-op orders were for Tom to stay in bed 24-7, for 3 months to make sure the healing process went on without a halt or any derailment or setbacks.

Currently, Tom is rehabbing in Peabody, MA at a facility called Pilgrim Rehab.

We are appealing to friends and well-wishers to come together and help ease Tom’s financial burden to cover basic living expenses, medical expenses and college loan payments.

Thank you and may God bless you abundantly!

Invites the community to join hands in a fundraising event in aid of Tom Mwaura of Salem Massachusetts, who has been undergoing treatment in hospital and rehab since September 2016

The event will be preceded by a Mass at St. John the Evangelist Catholic Church, 320 Winthrop Street, Winthrop MA 02152

The Fundraiser will be held immediately after the Mass at the Church hall.

Other options for sending your donations:

Share thisFacebookTwitterPinterestEmailWhatsApp  Community Appeal:Financial Help Appeal for an ailing Kenyan in Boston About 18 years ago, Tom Mwaura was involved in a car accident that left him paralyzed from the waist down. Over the years, through God’s mighty hand, He has enjoyed years of relatively good health. After blazing and taxing 12 months of physical