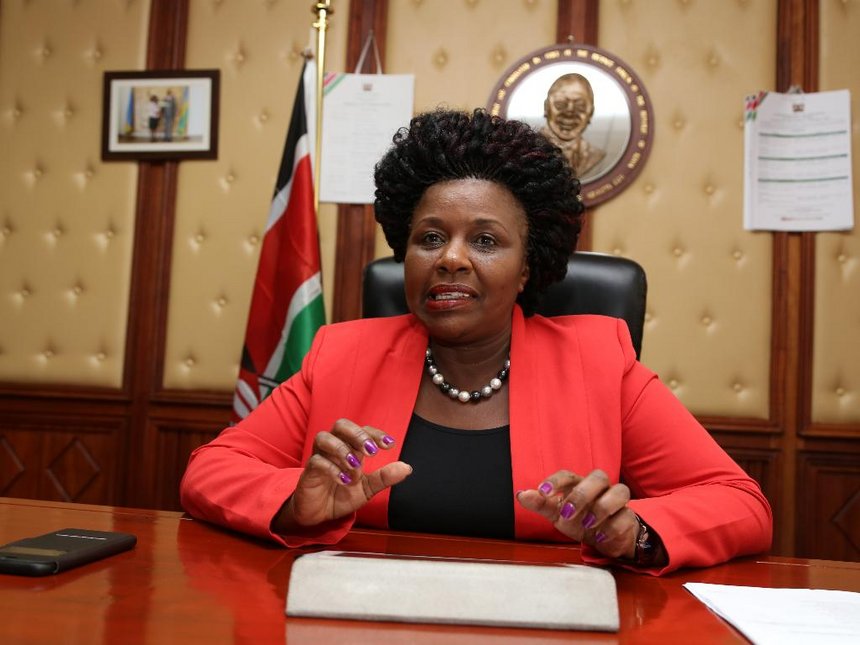 Jubilee nominee for the Bomet governor’s seat Joyce Laboso speaks to journalists in her office in Parlaiment. /HEZRON NJOROGE

Women are likely to be elected for the first time to some of Kenya’s powerful governor positions after making historic gains in party primaries this week, experts said, heralding a political breakthrough for the patriarchal society.

Kenya has East Africa’s lowest female representation in parliament – at 19 per cent – and women have struggled to make gains in the face of violence, intimidation and sexism.

That looks set to change in August’s elections.

“This time, at least two women are almost guaranteed for the position,” said Macharia Munene, a professor of international relations at Nairobi’s United States International University.

“They might win because they have proven themselves as capable leaders in previously held positions.”

Kenyans will vote for their president, parliament and county representatives on August 8.

The ruling Jubilee party and the opposition National Super Alliance, known by its acronym NASA, both elected women to run as county governors in primaries concluding on Sunday.

None of Kenya’s 47 counties, which manage local infrastructure, are headed by a female governor, an influential position overseeing budgets worth billions of shillings.

The counties get about 20 per cent of national revenues. They can also raise local taxes. In return, they must provide most health facilities, pre-schools, and local infrastructure.

Anne Waiguru, who is standing in the Jubilee stronghold of Kirinyaga, some 100 km northeast of the capital Nairobi, has a good chance of victory, Munene said.

She was the powerful minister for devolution and planning until she resigned in 2015, saying that unsubstantiated corruption allegations had taken a toll on her health.

Joyce Laboso, the deputy parliamentary speaker, is also well poised to win the western county of Bomet for Jubilee, he said.

“We have stepped up this year,” Laboso told the Thomson Reuters Foundation by phone. “Society must stop thinking that women are mere flower girls.”

Wavinya Ndeti, who was a member of parliament until 2013, is vying on a NASA ticket, while two of the three women to have stood for the Kenyan presidency – former ministers Martha Karua and Charity Ngilu – are both running under their own parties.

“Women have proved that they can be good leaders who want to change the lives of their people,” said Ngilu, who was Kenya’s first female presidential candidate in 1997.

Women usually lack the political clout and money to get nominated by the main players in primaries, where voters choose party candidates, often amid violent clashes.

“Apart from the physical violence we suffer during campaigns, we are also subjected to a lot of emotional abuse,” said Laboso.

Female candidates often hire bodyguards after threats of rape and beatings, sexual slurs or curses from elders for violating tradition.

Hopes for better female representation were raised in 2010 when the constitution guaranteed women a third of seats in all political offices, but the male-dominated assembly has repeatedly frustrated efforts to pass a law to enact the quota.

The High Court in March gave parliament until the end of May to pass the bill or face dissolution.

“Politics has for years been an enclave of male dominance,” Josephine Mongare, chairwoman of the Federation of Women Lawyers in Kenya (FIDA), told the Thomson Reuters Foundation.

“This time, though, we have good candidates… We might not get the numbers we want, but this will be a start.”

The counties were introduced five years ago after a government-appointed international commission concluded power was both too centralised and partly to blame for violence that killed 1,200 people following elections in 2007.

Only six women vied for the gubernatorial position in 2013 out of 237 candidates, all of whom stood either as independents or for fringe parties, according to the electoral commission.

The party primaries were hard fought. Dozens of chaotic races had to be suspended and re-run amid complaints over a lack of voting materials and rigging.

Share thisFacebookTwitterPinterestEmailWhatsAppJubilee nominee for the Bomet governor’s seat Joyce Laboso speaks to journalists in her office in Parlaiment. /HEZRON NJOROGE Breakthrough as Kenya poised to elect first female governors Women are likely to be elected for the first time to some of Kenya’s powerful governor positions after making historic gains in party primaries this week,