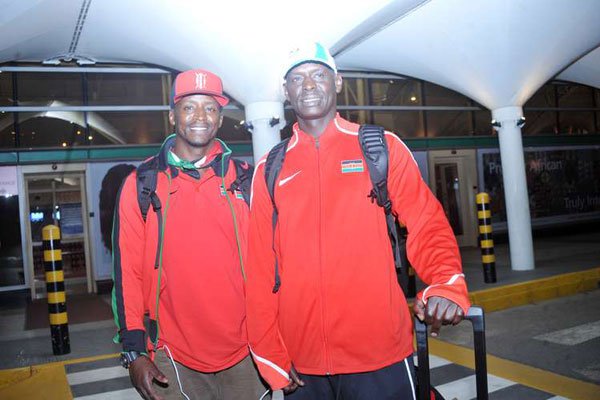 Controversy surrounding the Kenyan team in the Rio Olympics continues to deepen after it emerged that the Kenya Judo Association (KJA) officials had disowned the country’s sole representative at the games.

KJA boss Shadrack Maluki wrote a protest letter to the International Judo Federation (IJA) on June 22, stating Kenya should have been represented by Wambi Samson who had gone through the qualifying rounds in Kenya and Tunisia and not Levy Kiplagat Sang.

The association claimed Mr Sang, who was eliminated in the first round for committing basic fouls, had been handpicked by head of the Kenyan delegation Stephen Soi, who has been involved in a leadership dispute at the association since 2012.

Interestingly, Mr Sang was accompanied by three officials, including Mr Kipyego Sang, who is listed as his coach but who the association says is a relative of the judoka. Others are Mr Hezron Misati and Mr Hans Dickson Nyange.

KJA copied the terse letter, which criticised the National Olympic Committee of Kenya (Nock) for the selection, to the Sports ministry.

The controversy shines the spotlight on the delegation to Rio whose composition has been questioned after complaints that some coaches and key officials had been left out and their place taken by joy-riders.

For example, a list seen by the Sunday Nation indicates that apart from top officials, Nock accredited six people described as administrative staff: Lydia Kamau, Maurine Mutuku, Dorothy Otieno, Peter Ekai Wesley Maritim, Lamech Oriku and Abdullahi Omar. Apart from Ms Kamau, who is an administrative secretary at Nock, the role of the others in the organisation is not clear.

In some instances, there is also what seems to be duplication of roles. Nock’s legal adviser Sharad Rao was given an assistant James Kinyanjui. It is not clear if their input was even considered before athletics team manager Michael Rotich was ordered to leave over allegations that he offered to help foreign drug cheats training in Kenya to avoid doping tests.

Coach John Anzrah was also kicked out for impersonating 800 metres athlete Ferguson Rotich to access the Olympic Village for breakfast.

The national committee did not file an appeal when steeplechase champion Ezekiel Kemboi was denied a bronze medal after France successfully claimed he had stepped out of the track.

The role of Peter Angwenyi, the Media Liaison Officer, is not also clear given that he has not filed any report and does not answer any queries from journalists on the happenings in Rio.

The culture of joy-riders is thought to have started with the Seoul Olympics in 1988. Over the years, some sports administrators and government officials are thought to have found the Olympics and Commonwealth Games as the least expensive and hassle free opportunities to immigrate to the West, facilitate human trafficking, earn hefty allowances and take those close to them on “holiday” at the taxpayer’s expense.

At the 1996 Atlanta Games, for example, many were said to have secured US visas under the pretext of travelling to cheer athletes and sell curios. They never returned home.

The composition of Nock has also been under scrutiny as it is largely controlled by officials of small federations, whose representatives hardly win any medals, while the voice of the giant Athletics Kenya that is responsible for almost all of the country’s medals in international events is usually suppressed.

Those who have followed the fortunes of Nock believe that from the late 1980s, junior staff began conspiring with officials of fringe sports organisations to form a cartel that would take control.

At that time, Nock, headed by the late Samuel Mbogo wa Kamau, was highly regarded. All serving members were prominent people in government and the private sector.

It was not by coincidence that Charles Mukora, then an executive director of Coca- Cola Africa and a career sports administrator, was to take over from Mr Kamau.

But Mr Mukora was a laid- back corporate executive, leaving others to work instead. His approach is said to have allowed the cartels to thrive.
By 1996, Mr Mukora, who in 1992 was elected Laikipia East MP, had lost control of Nock.

So powerful were the small federations that in the elections of 1997, Mr Peter Kenneth, supported by the bigger federations, failed to wrestle the seat from Mr Mukora.

Those who were in Mr Kenneth’s side like athletics, cricket and football have since found it hard to find their way into the Nock executive body.

Mr Mukora’s departure in 1999 after he was linked to a bribery scandal that involved some IOC African members who were allegedly compromised by host cities ended the high standing status of Nock.

Those close to the legendary Kipchoge Keino, who now heads the organisation, say he may not be fully in control.

“Kipchoge Keino has delegated too much until impunity has taken root in Nock. If he is not careful, these people will spoil his global fame and reputation.

He will go down with them, which will completely shred his achievements and recent global recognition by IOC,” said our source, who spoke in confidence.