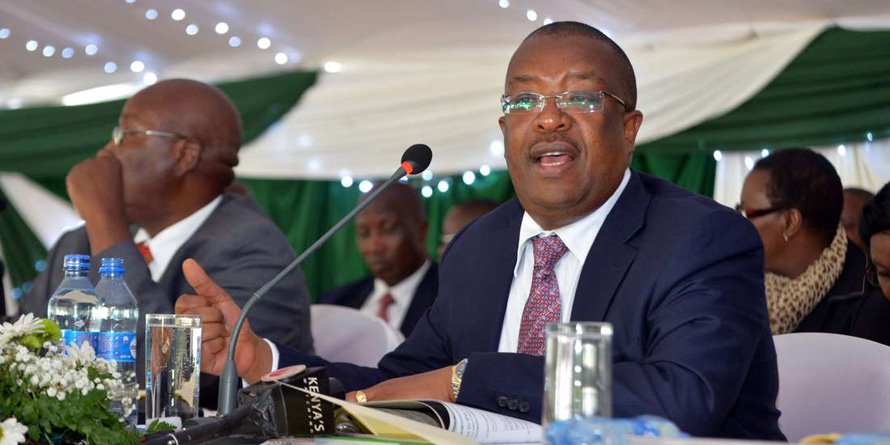 COOPERATIVE BANK OF KENYA GROUP MANAGING DIRECTOR GIDEON MURIUKI (RIGHT) AND CHAIRMAN STANLEY MUCHIRI DURING THE BANK’S ANNUAL GENERAL MEETING AT THE BOMAS OF KENYA IN NAIROBI ON MAY 27, 2016. PHOTO | SALATON NJAU | NMG

Co-op Bank says in its annual report that it paid Mr Muriuki a total of Sh370 million in the year ended December 2017 — Sh99.8 million in salary and allowances before crowning it all with a Sh270.7 million bonus.

The pay is equivalent to more than Sh1 million per day.

The report shows that Mr Muriuki earned Sh92.6 million in salary and allowances the previous year, meaning he got a Sh7 million pay increase in 2018. It is not clear from the report whether he earned any bonus for that period

KCB is Kenya’s biggest bank with Sh646.7 billion asset base while Equity is second with Sh524.5 billion total assets. Co-op has an asset base of Sh386.9 billion.

Co-op Bank says the remuneration reflects natural accruals from Mr Muriuki’s long service and his role in turning around the bank from a loss-making operation to one of the country’s biggest lenders.

“Under the performance driven culture, it is noteworthy that the bank has progressively improved profitability from a huge loss of Sh2.3 billion in 2000 and an asset base of Sh22.3 billion to the current profit before tax of over Sh16.4 billion and an asset base of almost Sh400 billion,” Co-op Bank says in its remuneration report.

Mr Muriuki, who was hired in March 2001, reported the lender’s first net profit of Sh164.7 million in 2002. The earnings rose in subsequent years to reach Sh11.4 billion in the year ended December 2017, representing a compounded annual growth rate of 30.32 per cent.

The bank’s shareholder funds, which stood at Sh1.9 billion in 2001, has grown to Sh68 billion and attracted a 50 per cent premium in the market, raising it to Sh103 billion.

Co-op Bank’s rise coincided with those of Equity and KCB. The three local lenders have since grown to overtake former top dogs Barclays Bank of Kenya and Standard Chartered Bank by nearly all measures, including assets, profitability and customer base.

Equity has cemented its position as the country’s most efficient bank with an annualised return on equity (RoE) of 28.5 per cent having reported a 21.4 per cent growth in net profit to Sh5.8 billion in the first quarter ended March 2018.

KCB and Co-op are at par with an RoE of 20 per cent, arising from 14.1 and 6.8 per cent earnings growth to Sh5.1 billion and Sh3.4 billion respectively in the same quarter.

Financial Times has consistently ranked the three Kenyan banks in the same peer group, despite their posting mixed results on various fronts.

While the three banks have a presence in nearly all the market segments, including retail, investment and corporate banking, Co-op has followed different strategies in its pursuit of growth.

The bank has entrenched its ties with savings and credit cooperative societies (saccos), providing it with a loyal customer base that supplies large and reliable deposits.

The lender took the same model to South Sudan where it formed a joint venture with the government, whose 49 per cent stake is held in trust for the country’s sacco movement.

Equity, which upended the local banking industry with zero-balance accounts, has relied on its retail banking success to expand its lending to large institutions.

KCB has relied on sheer scale of its operation and deposits from government agencies to take more territory in the regional market.

Original reporting by the Business Daily