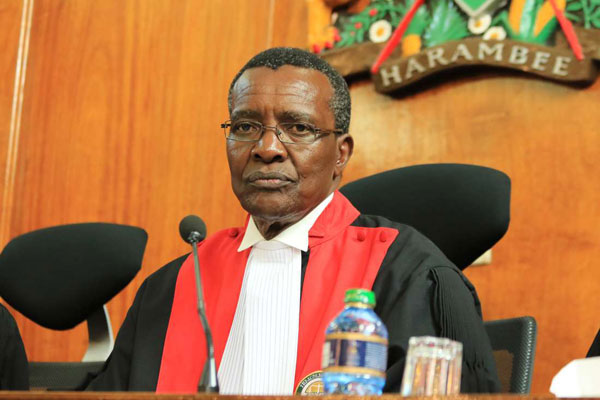 Chief Justice David Maraga Thursday hit back at Interior Cabinet Secretary Fred Matiang’i over his claim that some “evil clique” of judges had been captured by the opposition and “activist lawyers”.

In a terse response, Judge Maraga said Dr Matiang’i had spoken about a matter pending before the Court of Appeal, and should let the court deal with it.

“It is not true that any judges have been captured by the opposition, as it is being said,” Justice Maraga told journalists in Nairobi on Thursday morning.

“It is the orders they are issuing in their normal course of business. They could make mistakes in those orders. And we are saying, if they make mistakes, let there be an appeal. And when it is filed, wait for the matter to be dealt with. That is why I do not want to comment on the minister’s comments. Let the Court of Appeal deal with that.”

Appearing before the National Assembly Security Committee on Tuesday, Dr Matiang’i lamented about judicial officers he said were in a competition to embarrass the government, and stop state officers from performing their roles.

“It is an evil clique of judicial officers who want to drag us by the collar through the streets of public opinion,” said Dr Matiang’i, who insisted that the government, in the Miguna case, was condemned unheard.

But while refusing to address the matter in which Dr Matiang’i, Inspector-General Joseph Boinnet and Immigration Principal Secretary Gordon Kihalangwa were convicted for contempt over the second deportation of lawyer Miguna Miguna, judge Maraga said that there were open channels for the government to appeal the decision if they were dissatisfied with it.

“I am not aware of any part of the Judiciary that has been captured by the opposition, or the media,” he said.

“Some of those matters go to a particular division. We have the Judicial Review division, and the Constitutional division. That is where they are dealt with, and invariably, you find that they are dealt with by the same judges,” he added, making implied reference to Justice George Odunga who sat in the constitutional division until his Wednesday transfer to Machakos High Court as the presiding judge.

Mr Maraga said the Judiciary is ruled by the evidence presented before it, and that even before and after the August and the October 2017 elections, the courts had made orders ruling against both the government and the opposition, and vice-versa.

He went on: “We are telling parties: If you are not happy with the order that has been given by the court, the channel is there, you appeal. We’ve had quite some instances where the court has issued an order, the parties, not necessarily even the government, even individual parties, have appealed, and the Court of Appeal has set aside the judgments, some they have upheld. And that is the thing.”

The comments by Judge Maraga came a day after opposition leader also blasted Dr Matiang’i for his remarks.

“The CS appeared before Parliament to answer questions pertaining to abuse of rights of citizens and undermining the rule of law,” Mr Odinga said in a statement on Wednesday.

“Instead, he came out as the personification of impunity. Parliament should not allow itself to be a platform for State officers to make attacks on other arms of government.”

CJ David Maraga takes on Fred Matiang’i over attack on judges Reviewed by samrack on April 5, 2018 .