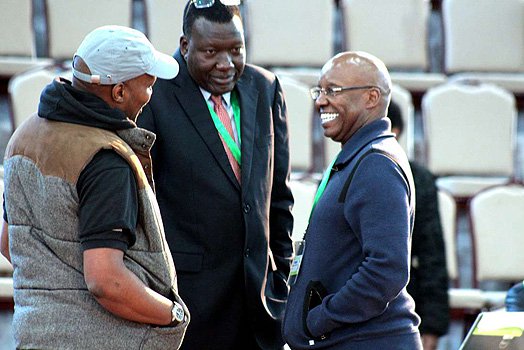 At a press conference on Thursday where Nasa leadership announced that Raila Odinga was leading the presidential race and that he ought to be declared the winner, Nairobi businessman Jimi Wanjigi was present.

He stood at the edge and would occasionally walk out. It is at his Caramel Restaurant in Nairobi’s ABC Place that Nasa’s press conferences and briefings are normally held, and where the titans of the opposition alliance are holed as they await the results of the hard-fought race.

Ever since he was publicly outed as the force behind the formation of Nasa, Mr Wanjigi — one of Kenya’s astute billionaires — has been appearing in public together with the alliance’s presidential candidate.

During the launch of the Nasa manifesto, Mr Wanjigi sat at the front where cameras were able to capture him as he sought to demystify his presence within the coalition.

He would later appear together with Mr Odinga’s family during the presidential debate, where he sat next to the Nasa leader’s wife Ida Odinga and daughter Rosemary Odinga.

That Mr Wanjigi is the new family friend in the Odinga progeny was perhaps captured when he appeared with Mr Odinga as he went to vote.

That morning, Mr Wanjigi had driven to Mr Odinga’s home in Karen and was present during a press conference addressed by the former Prime Minister before he voted.

On Thursday, a jovial looking Mr Wanjigi was at the Bomas of Kenya tallying centre where he was photographed while exchanging niceties with Jubilee agents.

That was before he left for ABC Place for the presser.