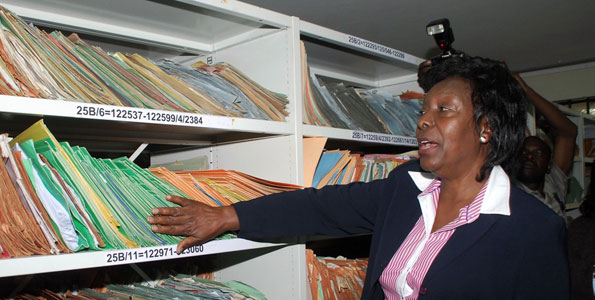 Mrs Ngilu said she was shocked that it is the topperformers that have been asked to step down. She is also angered that she was not properly briefed about her alleged crimes.

The minister spoke at her Ardhi House office in Nairobi where she handed over to her Information counterpart, Dr Fred Matiang’i.

She lamented that she learnt of her dismissal through the media and expressed shock that she had not heard of the matter until the time she was being asked to step aside.

“My rights have been infringed because no one informed me of what crimes I had committed. One should be innocent until proved otherwise. It is also not fair to condemn someone before they have been heard,” she said quoting parts of the Constitution.

Mrs Ngilu, however, insisted that she supports the war against corruption being spearheaded by President Kenyatta. “However, it should target the right people, not those who are performing well,” she said.

Mrs Ngilu is the latest CS to leave office since President Kenyatta handed a dossier containing names of 175 national and county government officials accused of corruption to Parliament. She was abroad when the listwas released on Thursday.

So far, five Cabinet secretaries have stepped aside, with pressure mounting on the 11 governors and various senators, MPs and MCAs mentioned to follow suit. The list is set to be tabled before Parliament today after which it will be made public.

Although Ms Ngilu said she was not aware of what had led to her suspension, several mega land grabbing scandals have taken place under her watch, including the Sh8 billion Karen land scandal, the State House land grabbing in which she was mentioned as having intervened on behalf of influential people and the attempted grabbing of Lang’ata Road Primary School playground.

Ms Ngilu claimed influential people unhappy with her reforms were behind her tribulations, but expressed confidence she would be vindicated.

Share thisFacebookTwitterPinterestEmailWhatsAppCharity Ngilu Pokes Holes in Uhuru Kenyatta Purge Lands Cabinet Secretary Charity Ngilu has criticised President Uhuru Kenyatta’s purge over corruption, saying it targeted the wrong people. Mrs Ngilu said she was shocked that it is the topperformers that have been asked to step down. She is also angered that she was not properly briefed about her