Burundi in crisis as top general and Nkurunziza aide assassinated 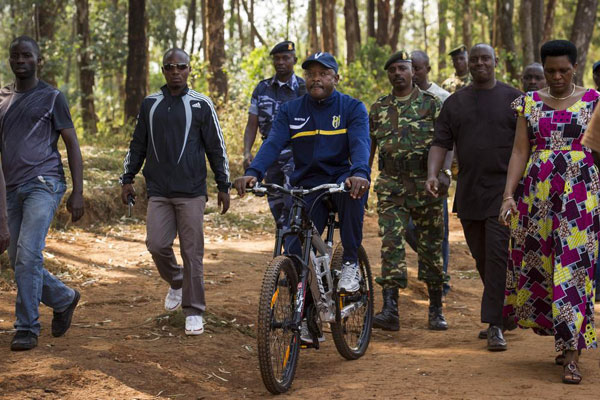 Burundi President Pierre Nkurunziza (centre) arrives to cast his ballot at a polling station in his native village of Buye in Ngozi Province, northern Burundi, on July 21, 2015. A top Burundian general and close aide to Nkurunziza was killed on Sunday. PHOTO | PHIL MOORE |  AFP.

Burundi in crisis as top general and Nkurunziza aide assassinated

A top Burundian general and close aide to President Pierre Nkurunziza was killed on Sunday in an ambush on his car in the capital Bujumbura, officials and witnesses said.

Police and witnesses said General Nshimirimana’s pick-up was hit by two rockets and sprayed with automatic gunfire in the capital on Sunday morning, and he was later confirmed dead, along with his driver.

The presidency’s communications chief Willy Nyamitwe confirmed the general, a former army chief of staff and intelligence chief, had been killed.

“I have lost a brother, a companion in the struggle. The sad reality is that General Adolphe Nshimirimana is no longer with this world,” he said in a message posted on Twitter.

The assassination comes just over a week after President Nkurunziza was declared the outright winner of controversial elections, securing a third consecutive term despite opposition protests and international condemnation.

Nkurunziza’s candidacy was condemned as unconstitutional by the opposition and provoked months of protests that left at least 100 dead in a fierce government crackdown, as well as an attempted coup in mid-May.

General Nshimirimana was seen as the mastermind behind the crackdown on the protests as well as a key player in foiling the coup attempt.

A source in the presidency said the situation in Burundi was “serious” and warned of a possible wave of revenge attacks.

“The situation is very serious. The general was somebody who was essential in the system,” said the source, who asked not to be named.

“We are trying to manage the situation but it is not easy. Our boys want to take revenge.”

Police sources said seven arrests were made, and a source in Burundi’s National Intelligence Service, the SNR, said security forces were “nervous”.

“You cannot imagine what General Adolphe represented for us,” the source said.

“They have declared war and they will see what they get,” said another top pro-Nkurunziza general, who asked not to be named.

There was no immediate claim of responsibility for the assassination, although the coup plotters have since regrouped and have launched a rebellion in the north of the country, and have also been linked to a string of grenade attacks in Bujumbura.

There are fears that renewed conflict in the country could reignite ethnic Hutu-Tutsi violence and bring another humanitarian disaster to central Africa’s troubled Great Lakes region.

Burundi in crisis as top general and Nkurunziza aide assassinated Reviewed by samrack on August 3, 2015 .

Burundi President Pierre Nkurunziza (centre) arrives to cast his ballot at a polling station in his native village of Buye in Ngozi Province, northern Burundi, on July 21, 2015. A top Burundian general and close aide to Nkurunziza was killed on Sunday. PHOTO | PHIL MOORE |  AFP. Burundi in crisis as top general and