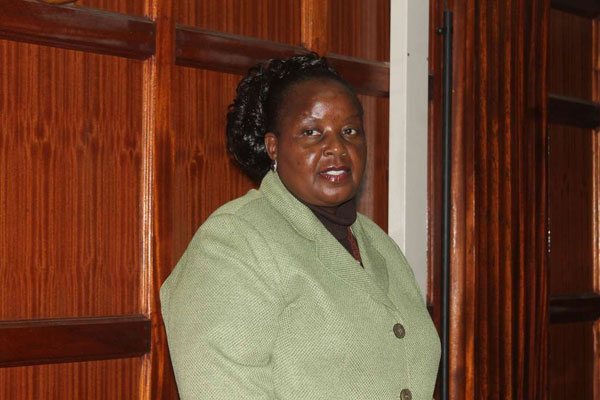 Nairobi’s Jubilee gubernatorial aspirant Bishop Margaret Wanjiru in a Nairobi court on May 2, 2017 for the mention of her case over chaos in the recent party primaries. The case will be mentioned on June 27, 2017. PHOTO | PAUL WAWERU | NATION MEDIA GROUP

The case over poll chaos against Jubilee’s Nairobi gubernatorial aspirant Bishop Margaret Wanjiru was halted yesterday but she will still remain in the cells to serve as an example in taming election chaos.

The Jesus Is Alive Ministries founder got a reprieve after the Magistrate’s Court, which had ordered on Thursday that she be detained for five days, suspended her trial. Chief Magistrate Francis Andayi had no option but to halt the trial following her appeal in the High Court against his ruling.

It will be mentioned on June 27.

The magistrate, however, declined to have Bishop Wanjiru freed on bond until she has spent five more nights in custody, saying that will serve as an example in preventing election chaos.

Lawyer Kennedy Ochieng argued before the High Court that the verdict was too harsh and violated her rights.

Bishop Wanjiru has denied causing malicious damage to property and creating a disturbance. She was accused of wilfully and unlawfully destroying four ballot boxes and assorted papers valued at Sh30,000 belonging to Jubilee Party at a polling station on April 26.

She was also accused of storming City Park Market polling centre in Westlands, Nairobi, disrupting voting in the party primaries, while in the company of a group of 50 rowdy people who scared away polling clerks.

The prosecution had told court that she is an influential person and would, therefore, interfere with witnesses.

The magistrate then sent Bishop Wanjiru into custody until yesterday, when she was to be freed on a Sh500,000 bond and two sureties.

However, Justice Ngenye Macharia ordered that the bishop be freed on Sh100,000 bond last Friday.

In a letter to the presiding judge of the High Court’s Criminal Division, Mr Ochieng had protested against the fact that the prosecution did not seek more time to have her detained so as to record witness statements.

Bishop Margaret Wanjiru stays in custody as case shelved Reviewed by samrack on May 3, 2017 .