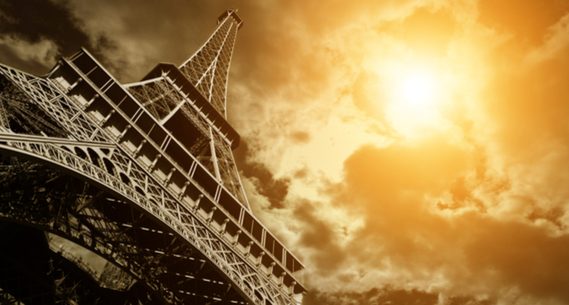 The Eiffel Tower in Paris. (Shutterstock)

The Paris conference on Sunday, in which representatives from 70 nations met to sign an anti-Israel agreement, brought together many factors, all pointing at a final showdown that pits the 70 sons of Jacob against the 70 nations under Gog in a pre-Messianic war.

As the 70 nations gathered in Paris, many people were aware that the concept of 70 nations has its source in the 70 grandsons of Noah listed in the Bible.

These three were the sons of Noach, and of these was the whole earth overspread. Genesis 9:19

This Biblical concept of 70 nations reappears in ancient Jewish sources as the 70 nations that will rise up against Israel in the End of Days. The Talmud states that the gematria (numerical  value of the Hebrew letters) of Gog and Magog (גוג ומגוג) is 70. Gog and Magog are the nations that will be defeated by Israel, ushering in the Messianic era.

And there shall they bury Gog and all his multitude; and they shall call it the valley of Hamon (multitude) –gog. Ezekiel 39:11

This internal aspect of 70 contained within Israel was made apparent while the 70 nations were meeting in Paris. On the very same day of the conference, Jews all around the world were reading the specific section of the Torah in the first chapter of the Book of Exodus relating how 70 souls, the offspring of Jacob, went down to Egypt.

And all the souls that came out of the loins of Yaakov were seventy souls; and Yosef was in Egypt already. Exodus 1:5

The 70 nations, unified under Gog, will face Israel. Israel, though only one nation, is composed of the 70 children of Jacob, as a counterpoint to the 70 nations under Gog.

John Kerry, the US Secretary of State, attended the Paris conference to protect the interests of President Obama. Even though he only has five more days in office, Obama is playing a central role in unifying the 70 nations against Israel.READ MORE
Source:  https://www.breakingisraelnews.com/

The Eiffel Tower in Paris. (Shutterstock) Biblical Numerology Reveals Stunning Connection Between Paris Conference, Gog and Magog By Adam Eliyahu Berkowitz The Paris conference on Sunday, in which representatives from 70 nations met to sign an anti-Israel agreement, brought together many factors, all pointing at a final showdown that pits the 70 sons of Jacob against