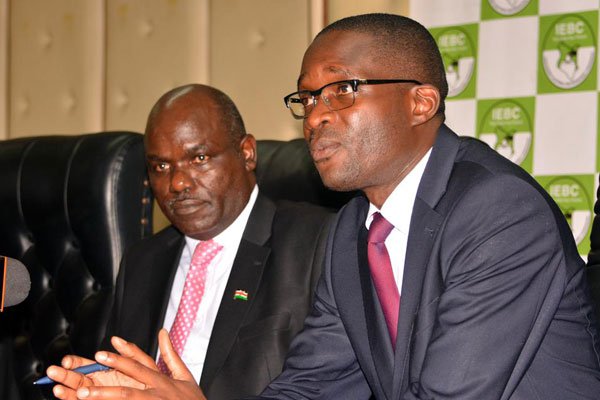 IEBC CEO Ezra Chiloba (right) and Chairman Wafula Chebukati address journalists at the agency’s offices in Nairobi on January 31, 2017.The IEBC will on Monday close the door to new applications by aspirants seeking to be on the ballot in the August General Election. PHOTO | EVANS HABIL | NATION MEDIA GROUP

The Independent Electoral and Boundaries Commission will on Monday close the door to new applications by aspirants seeking to be on the ballot in the August General Election.

The commission will now move to the next stage of endorsing names of successful candidates submitted after the party primaries, with the exception of aspirants who are yet to be cleared by their parties because of disputes in the nominations.

The electoral agency will start the day receiving the final applications from hundreds of aspirants who are seeking to run independently after they obtained a court order last week pushing the submissions deadline to today. More than 4,000 aspirants will run as independents.

Except for a few areas that are struggling to sort out nomination disputes, most political parties have largely completed their nominations and the party leaders have held meetings pleading with losers to support their rivals.

IEBC chief executive officer Ezra Chiloba on Sunday released a schedule of activities that the commission will carry out this week, following the hotly contested nominations.

“We have a very busy week because our deadlines are very tight. We will endeavour to ensure that we meet our targets,” he said on the telephone.

The IEBC has warned that politicians who did not confirm that they had been deregistered from their political parties before seeking to contest as independent candidates will be disqualified.

The commission will confirm from the Registrar of Political Parties and through its own investigations that all persons intending to contest in the elections as independent candidates do not belong to any party.

“All candidates must submit their symbols, letter of intent to vie and clearance from Registrar of Political Parties to IEBC,” says the IEBC in an announcement to aspirants.

The commission shall transmit the copies of party signatories’ specimen signature and candidate symbols to returning officers on Wednesday and Thursday.

Inspection and verification of the register will be done for 30 days from May 11 to June 9, according to the IEBC timelines.

Political parties and independent candidates had up to Sunday to submit to the commission their party symbols, names and specimen signatures of persons authorised by political parties to certify the nomination of the candidates.

The political parties held nominations from April 13 to 26 to pick candidates who will contest for governor, senator, MP and members of county assembly positions in the General Election.

President Kenyatta of Jubilee will face off with his 2013 rival, Mr Raila Odinga, the National Super Alliance flagbearer.

Political parties will be required to collect nomination papers and code of conduct from the commission between May 10 and May 31 to familiarise themselves with the requirements.

Commission chairman Wafula Chebukati has warned that political parties and candidates that go against the prescribed standards will be disqualified.

Mr Chebukati told political parties last week to respect the code of conduct and the election laws that give guidelines on how to conduct campaigns.

“Let us have peaceful campaigns. Let’s not incite people to do things that are not good,” said Mr Chebukati.

He said the commission would work with law enforcement agencies to ensure political players abide by the law during the campaigns and the entire election period.

This includes the police, and prosecutors from the office of the Directorate of Public Prosecutions, who will be trained on May 22

The commission will gazette names and symbols of independent candidates on May 13.

Aspirants rush to beat poll deadline Reviewed by samrack on May 7, 2017 .

IEBC CEO Ezra Chiloba (right) and Chairman Wafula Chebukati address journalists at the agency’s offices in Nairobi on January 31, 2017.The IEBC will on Monday close the door to new applications by aspirants seeking to be on the ballot in the August General Election. PHOTO | EVANS HABIL | NATION MEDIA GROUP  Aspirants rush to