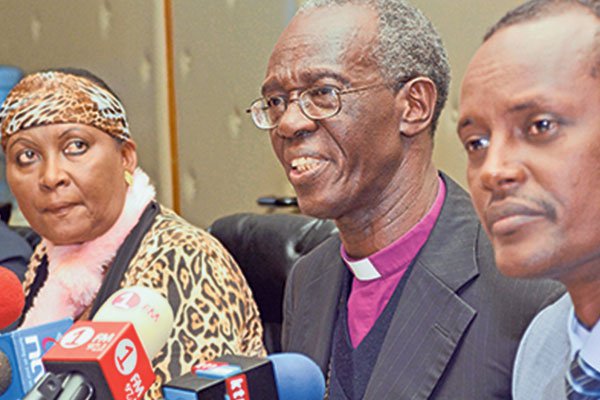 From left EACC Vice-Chairperson Sophia Lepuchirit, chairman Eliud Wabukala and CEO Halakhe Waqo during a press conference on August 16, 2017 at their office in Nairobi. The commission, through its CEO has said it is ready to investigate any electoral offences on the part of IEBC during the August 8 General Election PHOTO | DENNIS ONSONGO | NATION MEDIA GROUP

A joint team of investigators from the Directorate of Criminal Investigations and the anti-corruption commission will on Monday meet to deliberate on how to implement the directive to investigate the electoral agency.

Director of Public Prosecutions Keriako Tobiko on Friday directed the two investigating authorities to look into the Independent Electoral and Boundaries Commission over irregularities in last month’s elections.

Mr Waqo, through EACC head of communication Yasin Amaro, said the commission had already written to the DCI, expressing its willingness to work with its team.

“The joint team begins its investigation immediately and we are hoping to kick off tomorrow (Monday). We will know where to begin when they meet tomorrow,” he said.

Mr Amaro said the team was ready to start work.

The investigations are set to start in the absence of Director of Criminal Investigations Ndegwa Muhoro, who is out of the country on assignment.

Mr Tobiko gave Mr Muhoro and Mr Waqo 21 days to report back to him.

“I write therefore and pursuant to the provisions of Article 157 (4) of the Constitution… of the Elections Offences Act 2017 to direct and require you to, undertake jointly thorough, comprehensive and expeditious investigations into the irregularities and illegalities found by the Supreme Court to have been committed by the IEBC in relation to the presidential elections with a view of establishing whether electoral and or other criminal offences may have been committed by the IEBC officials,” he said in the directive released on Friday.

EACC and DCI will, as directed by Mr Tobiko, determine whether electoral or criminal offences, including corruption and economic crimes, were committed by the electoral commission officials.

The DPP had revealed in the letters to the two authorities that he had designated a team of senior prosecutors to provide technical guidance and assistance to the team.

Mr Tobiko ordered that the two also be investigated.

Even as the investigations begin, IEBC is expected to respond today to issues Nasa wants the commission to address before it can take part in the repeat presidential election scheduled for October 26.

Anti-graft, DCI teams to meet on plan to probe polls officials Reviewed by samrack on September 25, 2017 .

From left EACC Vice-Chairperson Sophia Lepuchirit, chairman Eliud Wabukala and CEO Halakhe Waqo during a press conference on August 16, 2017 at their office in Nairobi. The commission, through its CEO has said it is ready to investigate any electoral offences on the part of IEBC during the August 8 General Election PHOTO | DENNIS