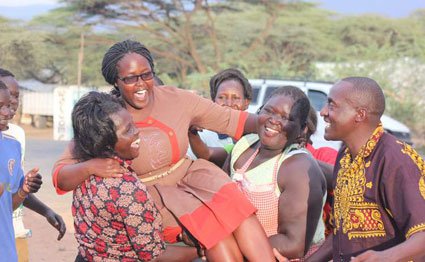 Ms Lokwee Chepkemei Phoebe is mobbed by her family at Marigat, Baringo County, on December 29, 2016 after emerging among the country’s top performers in this year’s Kenya Certificate of Secondary Education examination. Chepkemei, who hails from Chemolingot in Tiaty, sat the test at Alliance Girls High School and scored an A of 82 points. PHOTO | CHEBOITE KIGEN | NATION MEDIA GROUP

Alliance Girls made a dramatic comeback to the top of the charts as it registered 25 straight As in this year’s Kenya Certificate of Secondary Education. The school’s top candidates had 82 points.

It was closely followed by Kenya High School, which had 21 candidates with grade A, seven of them of 82 points. Few schools had A grade.
And girls generally had a field day. Out of the top 20 candidates nationally, 16 were girls.

However, the best overall candidate nationally was Jacob Wekesa of Alliance High School with straight As of 86.794 points.

Alliance Girls Deputy Principal Veronicah Ngunjuri affirmed that their performance was a testimony to their fidelity to rules and virtues of honesty and hard work.

Kenya High’s Principal Florah Mulatya said the results reflected the true capability of their candidates and commended the ministry for instituting drastic changes that enabled schools to show their real abilities.

Some of the top performing schools across the country were Kisii School which had six candidates with grade A of 81 points.

Others in the series were Mangu High School and Kagumo High School, which had three candidates with straight As. In the Rift , Moi Girls Eldoret, Kabarak and Kapsabet had two candidates each scoring grades A, while Nakuru Girls High School, Utumishi Academy and Nakuru Boys High had one candidate with grade A.

In Nyanza, other top performers were Agoro Sare of Homa Bay County and Nyambaria Boys High in Nyamira with one candidate each obtaining grade A. Friend’s Kamusinga of Bungoma was among the leading schools in Western region, with a candidate with grade A.

At the Coast, private schools dominated the top positions, among them, Light Academy Mombasa, Abu Hureira Academy, Memon High School and Sheikh Khalifa Bin Zayed Secondary School. The venerable Allidina Visram High School, an institution with a long and rich history, also made it to the top and did Lamu Girls Secondary School.

The greatest shocker of the day was the drastic drop in the number of candidates with sterling grades. Only 141 candidates scored grade A countrywide, representing a sharp decline from last year when  2,685 candidates scored the same grade. In fact, some schools had more than 200 grade As each, more than all the As attained nationally this year.

Again, compared to last year, there were only 88,929 or 15.41 per cent of the candidates attaining grade C+, which is the minimum entry qualification to university, compared to 169,492 last year.

This means that some 485,196 candidates failed to make the university grade, out of a total of 574,125 candidates who sat the exams this year.

Unlike in the past and particularly last year, no results were cancelled for cheating. Last year, results for 5,001 candidates were cancelled over irregularities; the highest in the history of the national exams.

Dr Matiang’i said the reforms introduced to clean up the mess in the setting, administration and marking of national exams had paid dividends.

Some candidates will, however, have to wait longer before getting their results because of suspected irregularities and other anomalies.

“We should take note that there are a few candidates whose results have been held back as Knec investigates the reasons as to why there were gaps in some of their examination papers, including failure to sit the minimum number of subjects or combinations as required,” said the CS.

Dr Matiang’i, who joined in the Ministry late year, initiated a raft of measures, starting with dissolving the Kenya National Examinations Council board and sacking top officials, including Chief Executive Joseph Kivilu and replacing them with a new team under the chairmanship of Prof George Magoha, a former vice-chancellor of the University of Nairobi.

The CS also reorganised the school calendar, extending the second term and shortening the third. Only the candidates remained in schools during the examination period. School principals were put in charge of exam administration.

Share thisFacebookTwitterPinterestEmailWhatsAppMs Lokwee Chepkemei Phoebe is mobbed by her family at Marigat, Baringo County, on December 29, 2016 after emerging among the country’s top performers in this year’s Kenya Certificate of Secondary Education examination. Chepkemei, who hails from Chemolingot in Tiaty, sat the test at Alliance Girls High School and scored an A of 82