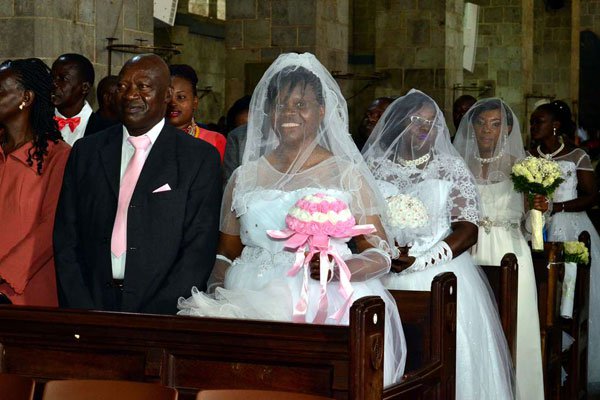 Never in the 100-year history of the All Saints Cathedral in Nairobi has a mass wedding been held. Well, until Saturday.

Twenty couples, tall and short, young and old, rich and poor, did a collective wedding in an event that the Anglican Church leadership hopes will encourage more members to exchange vows in the years to come.

The historic cathedral was a hive of activity from 9 am as vehicles of different makes, sizes and engine capacity dropped couples one by one at the entrance.

The youngest marriage among those who wedded has lasted six years, and there were couples who have stayed together for more than 30 years.

Speaking to some of the people involved, it became clear the long years of wives pestering their disinterested husbands on that dream wedding had finally come to an end. One man was candid enough to admit that he was “dragged” into the event.

“To be honest, my wife has been fighting about it all these years. And I’ve always said that we don’t have enough money,” said 69-year-old Wainaina Kung’u, who on Saturday solemnised his marriage to Tess, his wife of 22 years.

SCREAMING
“I was dragged into this literally. Screaming and kicking,” Mr Kung’u joked.

Mrs Claire Otieno, who solemnised her marriage to Collins Otieno, with whom they have lived for 19 years, said she has been pushing him “like every other year for 19 years”.

Organisers of the event wanted the wedding at the cathedral, which also acts as the headquarters of the Anglican Church of Kenya, to be unique.

According to Rev Canon Sammy Wainaina, the provost of the cathedral, one of the unique events was to have each person say “I do” individually rather than have them say it in a chorus.
“Mass weddings are not popular because people say their vows in unison,” Canon Wainaina told the Nation.

The church also provided a giant cake that was cut by the longest lasting couple, together with the one that has existed for the least number of years.

“We’ll even provide them with lunch and most of the other things like flowers,” said Canon Wainaina on Friday as preparations for the event were being finalised.
The mass wedding is one of the events the cathedral is holding to mark its 100 years of existence.
“Our target was 100, as we commemorate 100 years,” Canon Wainaina said. “We had 22 but now we have 20.”

The provost said previous attempts to have mass weddings at the cathedral have failed because most people prefer going private.

But this year, they decided to make all efforts to give some church members a sense of belonging.

“We were getting concerned that there were many people who were not coming for their communion. The practice of the church is that you should have solemnised your marriage in church as a pre-condition for you to receive the communion,” he said.

BRIDES
Besides the communion, the brides who spoke with the Nation had more reasons to be pleased about the solemnisation.

Mrs Josephine Kivuti, for instance, is happy she can now fully participate in the Mother’s Union, a powerful welfare organisation of the church. She has been living with her husband Salesio Kivuti, a businessman, for 33 years and they have three children.

“We’ve been trying to organise and getting a chance has been hard because sometimes everybody is very busy,” Mrs Kivuti said.

She was glad the wait was finally over. Even her husband who has been a subject of continuous teasing whenever he was with other men in the church, she said, will now have peace of mind.

“Through that teasing, he felt enough is enough. We also want to show a good example to our children. Marriage through church has more blessing,” said Mrs Kivuti, a primary school teacher. And for Mrs Otieno, making her commitment in church made all the difference.

“I’m happy; though nothing much is changing. We’re not a new couple. What will change is now we have a certificate; it’s official. So if he wants to go and get another one… you know, you can be left any time because you’re not married,” she joked.

Her husband, with whom they have two children, was thankful the church had subsidised the event.

PRIVATE WEDDING
“A private wedding is very expensive. That’s why most couples do not even manage it. When you do it as a group, it reduces the cost to almost nothing,” said Mr Otieno.

Mr Kung’u, he who admitted that he was “dragged” into the event, was also happy with the church subsidy.

“We’re probably paying something like 10 per cent of what a normal wedding could cost. They’re even giving us a cake,” he said.

None of the three couples we interviewed had a wedding committee to help raise funds for the event.

“Those are things that are done by teenagers,” said Mr Kung’u, who was at one time a golfing columnist at a local publication.
Canon Wainaina said fresh couples were not included in the mass wedding.

“This initiative is not for young people. It’s for people who have already settled in their marriages and they feel they need to invite God’s blessings; what we call the solemnisation,” he said.

As for the reasons that make people shy away from wedding before starting life as husband and wife, Canon Wainaina called for a reversal of the trend where weddings are subtle competitions between couples.

“Once you’re ready to get married and your parents have given you their blessings, please go ahead and do a simple wedding. A wedding is not determined by how much you invest in it. It’s by the commitment of the couple,” said Canon Wainaina.