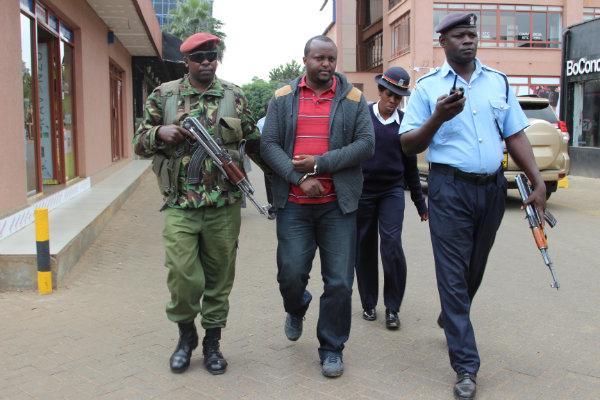 Alejandro Wanjau escorted out of a restaurant after he was arrested by police detectives. Photo/Nyota Caren

Benson Wanjau, alias Alejandro, has been remanded for 7 days by a Kigumo court, to allow more time for investigations.

The magistrate denied Wanjau bond and ordered he be remanded at Makuyu police station.

“His remand will eliminate the possibility of his interference in the case,” she said.

An application to unfreeze his bank accounts was also denied.

The prosecution is investigating a car under Wanjau’s ownership, to find out whether it was bought using the Fidelis Medical Fund.

Wanjau helped raise the money for Baby Fidelis Muthoni’s treatment, through his Hope Foundation organisation, but declined to release the money to her parents.

Last week, Wanjau was summoned by the same court and asked whether he objected having his accounts frozen.

Murang’a county Police Commander Naomi Ichami, said Wanjau did not object and even committed to deposit money in baby Muthoni’s account by last Friday, a promise he did not keep.

Alejandro Wanjau escorted out of a restaurant after he was arrested by police detectives. Photo/Nyota Caren Alejandro Wanjau detained for seven days over missing Sh2.8 million Benson Wanjau, alias Alejandro, has been remanded for 7 days by a Kigumo court, to allow more time for investigations. Wanjau was arraigned before senior resident magistrate Agnes Mwangi,