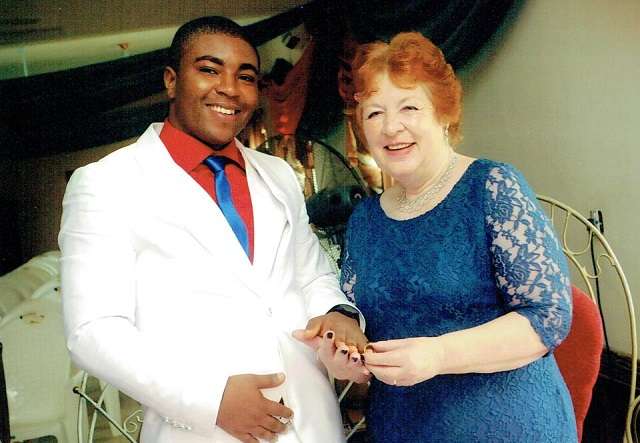 A 72-year-old British grandmother who got married to a 27-year-old Nigerian man is not happy he has been denied visa several times to travel.

A 72-year-old grandmother of six, Angela Nwachukwu, a Briton, who got married to a 27-year-old Nigerian man identified only as CJ, has cried out at the injustice done to her by the UK Embassy by refusing to grant her husband a visa to go and be with her.

The Sun UK reports that the love struck Angela who met CJ on Facebook and flew down to Nigeria to get married to him after only three months, has not been herself after spending over £20,000 of her life savings trying to get CJ to the UK.

Anglea, a retired taxi driver, had reportedly met CJ, 45 years her junior, on the social media and after dating for three months, she flew down to Nigeria where they got married at a registry in Lagos but since then, it has been impossible for him to move over to be with her.

The heartbroken Angela, a pensioner from Dorchester, Dorset, told the Sun UK:

“CJ is the most caring man any woman could want to be with. He makes me feel like the most beautiful woman in the world.

I know in my heart we belong together and we won’t stop fighting until we can be together as husband and wife. We won’t let this break us.READ MORE