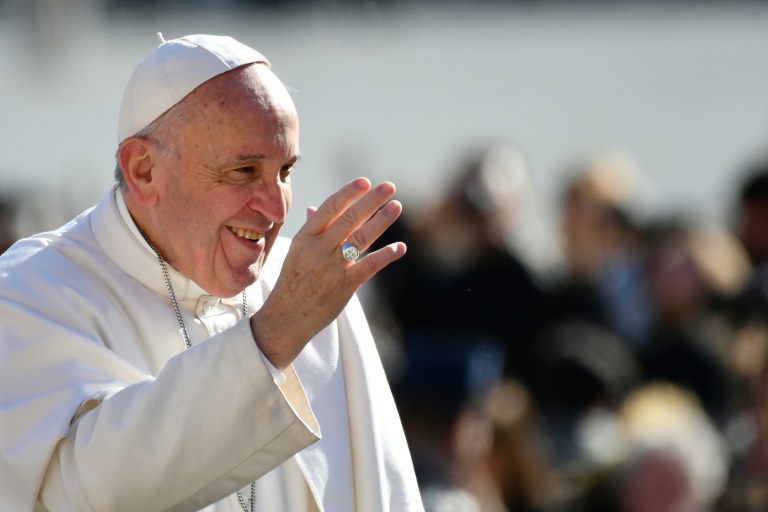 Pope Francis, seen March 2, 2017, is believed to be among the ideologically diverse 318 nominees for this year’s Nobel Peace Prize © AFP/File / Vincenzo PINTO

Oslo, Norway, Mar 3 – A near-record 318 people and organisations are in the running for this year’s Nobel Peace Prize, the Nobel Institute said on Thursday, a motley crew believed to include Syria’s White Helmets, Donald Trump and Pope Francis.

The names of the nominees are kept secret for 50 years, but those entitled to nominate candidates — including lawmakers and government ministers, former laureates and some university professors — are free to reveal the name of the person or group they have nominated.

As a result, the list is believed to include the White Helmets, jailed Saudi blogger Raif Badawi, and Edward Snowden, who revealed the scope of America’s NSA electronic surveillance programme.

The same goes for US President Donald Trump, nominated by an unidentified American who wants the US leader recognised for “his peace through strength ideology”.

The American Civil Liberties Union (ACLU), which is highly critical of some of Trump’s first acts as president, is also believed to have been nominated.

Yet others include Pope Francis, nominated by a Norwegian member of parliament because “he is one of the rare ones to stand up to Donald Trump”, as well as Russian President Vladimir Putin and former French president Jacques Chirac.

The only tidbit the Nobel Institute would disclose was the breakdown of the nominations: 215 individuals and 103 organisations.

This year’s number of candidates is the next-highest since the prize was first awarded in 1901, second only to 2016 when 376 names were in the running.

The Nobel committee, whose chairwoman Kaci Kullmann Five died of breast cancer on February 19, is expected to announce the 2017 laureate on October 6 though that date has yet to be confirmed.

Last year, the prize went to Colombian President Juan Manuel Santos for his efforts to bring peace to his country ravaged by a half-century of conflict.