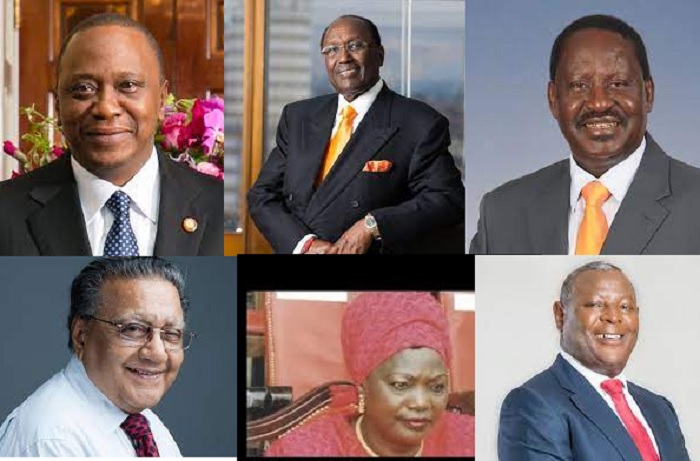 An Updated  list  of the richest people in Kenya  reveals the top 20 wealthy Kenyans who attain a certain threshold as Billionaires.

In a report by Knight Frank released in March 2020, Kenya has 42 ultra-high net worth individuals, worth over US$30 million each, which is equivalent to KSh3.07 billion.

The country has been ranked fourth in the Knight Frank’s Wealth Report list of the African States” ultra-rich.

But the people listed in this article are worth millions of dollars and have appeared on several lists of rich people in Kenya.

Typically intangible assets such as educational degrees are not factored into net worth, even though such assets positively contribute to one’s overall financial position.

Wealthiest people in Kenya by order

Here are the wealthiest people in Kenya; some are deceased, but their names still hold much transferred to their kin.

Moi and his family are among the country’s most affluent families, with an estimated net worth of $3 billion. They have several companies and have invested in almost every niche in Kenya. Moi’s wealth is hard to track owing to its diversity and secrecy, but needless to say, at USD 3 billion, he is one of the richest men in Kenya and beyond.

At the time of his death, Biwott owned the prestigious Yaya Center, a landmark shopping center in Nairobi. He also owned Air Kenya, among other ventures. His business dealings were in total secrecy, making it hard to determine his net worth.

However, the Nigerian Venture magazine placed Nicholas Biwott at $1 billion, making him one of the richest men in Kenya and Africa.

The two are among the 55 Africa’s dollar billionaires in a list that includes two Kenyans, Naushad Merali and Manu Chandaria. The magazine tips as the country’s wealthiest and 25th most prosperous continent with a fortune of $1.65 billion (Sh142 billion).

Mama Ngina, the mother of Kenya’s fourth President, Uhuru Kenyatta, has a net worth of $1 billion (Sh86 billion) spread in the real estate, banking, and hospitality sectors. She is among the three women that made it to Africa’s billionaire club.

He is the founder and current Chairman of BIDCO Group of Companies, a Kenya-based, family-owned manufacturing conglomerate with businesses in 13 African countries. He is one of the wealthiest people in Kenya, with an estimated net worth of approximately US$700 million.

He is a businessman and an industrialist who is Kenyan mobile service provider Kencell and French media giant Vivendi. He schooled at the Highway Secondary School in Nairobi.

He was formerly the chairman and largest individual shareholder of Bharti Airtel’s operations in Kenya, but in 2014 he sold his shares and stepped down from the company’s board. His net worth valued at USD 550 Million

Kirubi is an individual with many attributes to his personality and business life; Kirubi is a businessman, industrialist, and philanthropist. He is the current chairman of Centum Investment Company Limited, in which he is the largest individual shareholder. His net worth is over US$300 million. He is also the East’s biggest mall owner, and Central Africa was known as Two Rivers Mall.

Comcraft operates in more than 11 African countries, Chandaria is also in the real estate business, and his net worth is estimated at $270 million.

Atul Shah was Born in Nandi Hills, Kenya, in 1961, grew up under harsh conditions. He is currently the Managing director and Chief Executive Officer of Nakumatt Holdings.

Nakumatt was one of the largest privately-owned supermarkets in Kenya, Uganda, Tanzania, and Rwanda, which has more than 7,000 people on its paid list and with annual sales of well over US$650 million.

His net worth is more than USD 290 Million. However, His fortunes may be parachuting owing to the downward trend of Nakumatt over the last few years.

Peter Munga is the group chairman of the Equity Bank Group, one of the largest on the African continent with a customer base of over 9.3 million. Munga’s net worth is more than USD 280 Million, making him one of Kenya’s richest men.

Raila Odinga is popularly known in Kenya as the father of Modern Democracy and Prime Minister or Baba.  His net worth is (US$250 million)

James Mwangi is a businessman, banker, and the current Group Managing Director and Group Chief Executive Officer of Equity Group Holdings Limited. James Mwangi and his wife also own shares in Equity Group Holdings Limited and British American Insurance Company Limited (Britam). This makes the family one of the wealthiest in Kenya.  The family’s name is on marble with a net worth of upward US$170 million at a time.

S.K. Macharia is a businessman and media mogul who owns numerous English, Kiswahili, and Vernacular stations, including Citizen TV, Kiss, Radio Jambo, Ramogi, and Muuga Chamgei, Inooro, Bahari, and Wimwaro. These stations collectively make The Royal Media company one of the most successful media companies in Kenya.

S.K has also tried his hand in Agriculture, Real estate, Transport, and Banking.  His total net worth is estimated to be $150 million. He is said to be an all-rounder as his investments are found in all major companies in Kenya.

Baloobhai Patel is a businessman, entrepreneur, and philanthropist in Kenya. His investments include the tour company Transworld Safaris Limited, which he wholly owns and serves as the managing director.

Titus Naikuni is a mechanical engineer, businessman, and corporate executive in Kenya. He has made a fortune and managed to be on the list of the wealthiest individuals in Kenya.  He has a net worth of USD 140 Million.

Joe Wanjui (Joseph Barrage Warui) is a businessman and a political advisor. He is the Chief Executive Officer of Unilever. He serves as the Chairman of UAP Holdings Limited and the Jockey Club of Kenya. Valued at USD 125 Million, He is described by many as a most accomplished individual.

Bharat Thakrar is valued at USD 90 Million. Founder and CEO of Scan Group, East Africa’s most extensive marketing services, he is the company’s largest shareholder. He is valued to be US$$90 million in net worth.

She is a Kenyan Lawyer, Businesswoman, and Investor. Jane Wanjiru is the managing partner at Kimani & Michuki Advocates, a corporate law firm based in Nairobi with vast clients all over the country. Her estimated net worth is US$60 million.

The asset valuation of Fina Bank (Kenya) is estimated to be approximately $171 million. The first African governor of the Central Bank of Kenya (CBK), Ndegwa, also served as the first Kenyan African Head of the Civil Service. His exact net worth is not known but is sure to run into the millions of dollars.

Paunrana is one of the richest people in Kenya who is valued at USD 80 Million. He was born in 1959 and educated in Kenyan schools.

He spent two years with a software company in New York, where he earned US$40,000 annually and returned to Kenya in late 1984. He later teamed up with his father in his business, which later became known as ARM Cement Limited, listed on the Nairobi Security Exchange (NSE).

Stay in touch as we bring you the net worth of each in the next post of Kenya’s wealthiest people.

2021 Kenya’s Top Richest People (Updated) An Updated  list  of the richest people in Kenya  reveals the top 20 wealthy Kenyans who attain a certain threshold as Billionaires. Kenya being  the largest economy in the East African Community and the 3rd largest economy in Sub-Saharan Africa with GDP of US$70.539 billion has some of the richest people.