Yahya Jammeh hangs onto power by thread as AU denies him 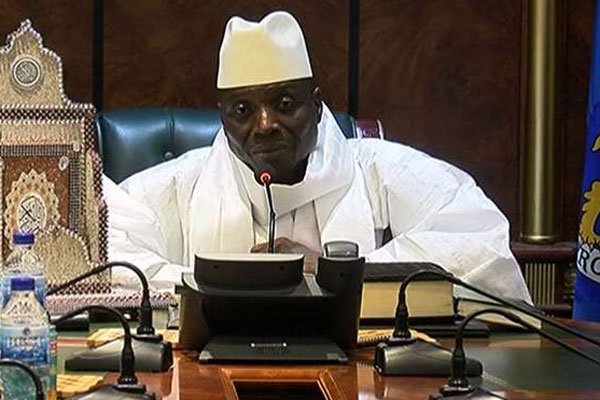 Yahya Jammeh. He has refused to hand over power to Adama Barrow but for how long? PHOTO | AFP

Yahya Jammeh hangs onto power by thread as AU denies him

President Yahya Jammeh of The Gambia on Thursday appeared to be clutching at the last straws of his tyrannical power as the international community started announcing it no longer recognised him.

Jammeh, who was defeated in last month’s General Election by Adama Barrow, had refused to step down even as the president-elect went ahead with plans to be sworn in at the country’s embassy in neighbouring Senegal.

Botswana became the first African nation to cease recognising Jammeh as the leader of the Gambia, hours after the AU said it would categorise him as a coup leader and, therefore, not fit to be associated with.

“Mr Jammeh’s decision not to respect the will of the Gambian people undermines the ongoing efforts to consolidate democracy and good governance in The Gambia and Africa as a whole,” Botswana government said in a statement on Thursday.

“The Government of Botswana, therefore, continues to appeal to the international community to do all within its power to exert pressure on Mr Jammeh to hand over power in order to ensure a smooth transition.”

As Jammeh hang on for dear power, his lawyer Edward Anthony Gomez, who had filed a petition in the Supreme Court seeking to annul elections, fled to Senegal and urged his client to leave.

“I have to admit that I was working under tremendous pressure and coercion. All the lawyers with established practices in The Gambia refused to be associated with the said petition,” he said in a public letter shared widely on social media.

“In my present situation, I humbly and respectfully, advise President Jammeh as the Champion of peace he has been known to me to peacefully step aside in the interest of peace and safety of the Gambian people.

On Thursday, Mr Barrow said he would be inaugurated at the Gambian Embassy in Senegal at 4pm local time (7pm EAT), just two days after Jammeh declared a state of emergency in the tiny West African country.

“My dearest Gambians — the presidency of Yahya Jammeh is officially over. The new era of Gambia is here at last,” Mr Barrow wrote on his Twitter page on Wednesday.

“I would like to inform you that the inauguration ceremony is going to take place at the Gambian Embassy in Dakar, Senegal #Gambia.”

And the African Union said Jammeh had violated the democratic values the continental body stands for and would no longer be associated with him.

“As reiterated by the AUPSC (AU Peace and Security Council), failure to hand over power on January 19, 2017, would be considered an Unconstitutional Change of Government in the Gambia.”

The African Union, whose members meet next week in Addis at an annual summit, passed a law in 2007 to forbid change of governments through coups or refusal to leave power once defeated at a ballot.

But the continental body had been largely only vocal on coups but silent on incumbents who stay on forcibly.

Under the African Charter on Democracy, Elections and Governance, the AU can take several actions towards a guilty member state.

But Jammeh, who had initially accepted defeat, turned around and rejected the results.

He has since taken the case to the Supreme Court although the court has not stopped the inauguration.

Presidents are normally sworn in on home soil but Barrow’s decision to take oath of office abroad may have been informed by the security situation back home.

Jammeh, who came to power through a coup, was notorious for human rights violations, especially jailing his opponents.

On Tuesday, Mr Barrow told his people a new order would be returned to The Gambia.

“We made history on the first day of December. Our future starts tomorrow,” he said referring to the day of elections last year.

However, Jammeh’s refusal to leave power roiled the West African neighbours, who through their bloc the Economic Community of West African States, have started assembling a standby force to intervene.

But in the case of Jammeh, who has rejected pleas to leave, the Ecowas had announced it was sending troops to neighbouring Senegal to prepare for intervention should the security situation worsen.

The intervention though, may require endorsement from both the AU and the UN Security Council.

Yahya Jammeh hangs onto power by thread as AU denies him Reviewed by samrack on January 19, 2017 .

Share thisFacebookTwitterPinterestEmailWhatsAppYahya Jammeh. He has refused to hand over power to Adama Barrow but for how long? PHOTO | AFP Yahya Jammeh hangs onto power by thread as AU denies him President Yahya Jammeh of The Gambia on Thursday appeared to be clutching at the last straws of his tyrannical power as the international community