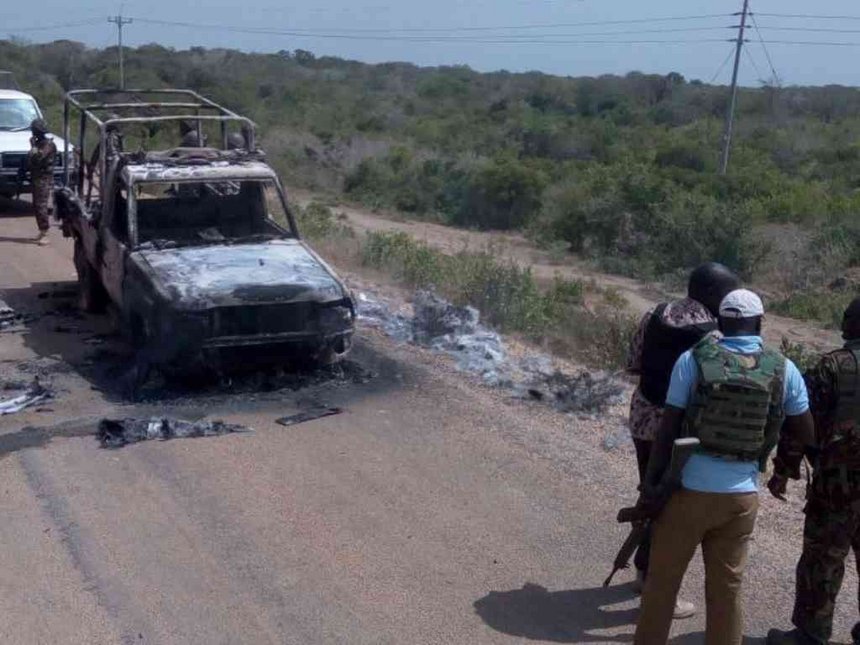 The AP vehicle that was torched by suspected al Shabaab militants during an attack in Lamu county, January 13, 2018, /Cheti Praxides

One civilian was killed and five police officers injured in an ambush by suspected Al-Shabaab militants in Nyongoro, Lamu County, which borders Tana River County.
Coast regional police boss Larry Kieng said the slain woman was travelling in the AP security motor vehicle.
“We can only confirm the death of a woman who had been given a lift by the police officers. However we are yet to account for our two police officers. They were 15 police officers, we have only accounted for 13,” Mr Kieng said.
ATTACK
Mr Kieng said among the 13 officers, some escaped with minor injuries and they were receiving treatment in hospitals in Witu and Manda.

However, reliable sources said three police officers were killed in the attack, while another source added that they feared the death toll could rise as some officers went missing during the attack.
Two land cruisers belonging to the police officers were reduced to ashes during the attack.
Suspected Shabaab militants attacked the police officers at Nyongoro as they were escorting buses from Lamu to Mombasa.
The gang engaged the police in a two-hour exchange of fire.
MANHUNT
Lamu County Commissioner Gilbert Kitiyo and his Tana River counterpart Oning’oi Ole Sosio said a reinforcement team was dispatched to the area to help fight the attackers and pursue those who fled.
Mr Sosio said some militants were shot dead while others escaped with serious injuries.
Police forces are still on the ground pursuing the militants, he added.
The attack comes a few weeks after two Administration Police officers were killed and three others injured when suspected Shabaab militants ambushed an escort vehicle they were travelling in at Lango La Simba in Nyongoro, along the Lamu-Malindi road.
The officers, who were escorting five passenger buses from Lamu to Mombasa, died on the spot.
SHABAAB
The militants have many times attacked convoys at Nyongoro area.

On August 3, three people were killed in an Al-Shabaab attack on a bus at Nyongoro.

The gunmen opened fire on the bus heading to Kipini from Malindi and a security escort vehicle.

On August 7, suspected Shabaab militants launched an IED attack on a lorry transporting fish within the same area, leaving two people – a driver and his co-driver – critically injured. The lorry was torched.

On the same day, the entire Lamu County was hit by a mega power blackout after an electricity power pylon carrying over 220KV of electricity and located between Gamba and Nyongoro areas was bombed by the terrorists.

The AP vehicle that was torched by suspected al Shabaab militants during an attack in Lamu county, January 13, 2018, /Cheti Praxides Woman killed, five officers injured in Shabaab ambush One civilian was killed and five police officers injured in an ambush by suspected Al-Shabaab militants in Nyongoro, Lamu County, which borders Tana River County.